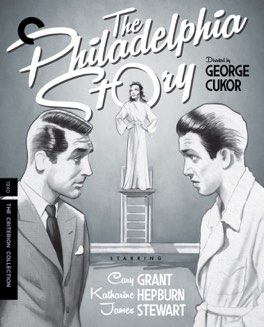 I liked the sparkling wit, the humor, and the incredible performances. I didn't like the misogyny or the spousal abuse.

I'm conflicted about this film, in a similar way to how I felt watching His Girl Friday.

I suppose that's not entirely surprising, as they have a reasonable amount of commonality. They both star Cary Grant, for one thing, and they're both Comedies of remarriage for another.

Both feature sparklingly fresh dialogue, with lots of witty repartee. They're both more than a little bit screwball in nature. As it turns out though, none of that is the problem. The problem is the message that this film is trying to convey.

The film follows Tracy Lord, a divorcee who is about to marry her second husband. She's from an ultra-rich family and very protective of her privacy. Because she's ultra-rich a gossip magazine wants to do a story on her wedding, and so they blackmail her ex-husband Dexter to help smuggle in reporter Mike, and his girlfriend/photographer Liz.

Quickly Tracy figures out what's really going on, and the whole thing revolves around her dealing with her ex-husband, her encounters with the reporters, and her upcoming marriage to her new husband. But more than that, the story focuses on supposed problems with Tracy.

The moral of the story is concerned with Tracy's demeanor and her treatment of the men in her life. She's told that she's too aloof; she's compared to a goddess looking down on humanity. She demands self-perfection, and also perfection from all those around her.

When they can't meet her supposedly impossibly high standards, she abandons them. If only she would let people fail a little bit, how much better things would be.

On the surface those aren't terrible points. We should be understanding of the foibles of others, perfection is an impossibility, and remaining aloof makes it very hard to have lasting relationships with anyone. The issue is how she's told this information, by whom, and what the resulting consequences are.

Almost all the men she knows have a bone to pick with her. Her ex-husband, who is of course the man she is meant to be with, this is that kind of film, is a recovering alcoholic. As the film opens we see him physically assaulting her. He tells her that both his alcoholism and his abuse were her fault.

If only she had just let him be an imperfect person, he would have been able to drink less, and not hit her.

Her father, who has been cheating on her mother, blames her for his infidelity. He tells her that when a man's daughter isn't dutiful and loving enough it drives him to find love in the arms of younger women. He says this in front of her mother, and the mother more or less agrees with him.

Her fiancé loves her, but only for the coldness the others blame. He sees her as pure and pristine, and when she turns out to be a person like anyone else, he drops her.

This is all absolute trash. First of all, the moral failings of these men is not Tracy's fault. For another thing, the film has her fall back in love with the husband who abused her.

Exactly one man in the film is decent to her, the reporter Mike. He's a seemingly decent guy, if a bit class obsessed, and he sees her as a person, not a statue. She doesn't end up with him, of course, because he's not in her league class-wise, and that's apparently a chasm that's just too wide to cross.

It's really a shame. This film features wonderful performances, some really funny moments, and a lot of heart at times. The misogyny and the ending spoil it all. - Mar 3rd, 2020