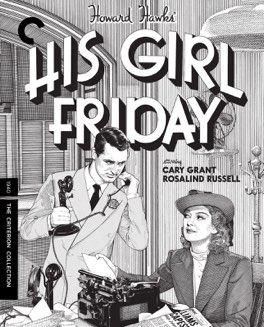 One part amazing dialog, one part incredibly cool and strong lady, four parts racism, and ten parts shitty people being awful. It’s a potent mixture of some kind for sure.

Oh man, I do not remember the last time I struggled this much trying to decide how I felt about a film. On the one hand, there is a lot about this I find reprehensible, racist, and just don’t like. On the other hand, it features some of the funniest, and wittiest, dialog I can ever remember, with a surprisingly Feminist world view. So, I’m torn.

The basic plot is offensive and totally unexamined in the film. The story opens with Hildy Johnson, a former star reporter for a big-time Chicago newspaper. She’s come back to the office to tell the publisher, her ex-husband Walter Burns, that she’s leaving the business to get married and live a normal life. He wants her back, and so manipulates her into working one last story, wherein a man is being hung for a murder that Walter believes doesn’t deserve that level of punishment.

This is where the trouble begins. The murder this white man has committed, is the shooting of an African-American police officer. He has possibly done this by accident, but he has definitely done it. Walter suggests the only reason he is being hung for it, is because the corrupt mayor wants to court the minority vote in order to win re-election.

What the hell is that? In 1940, the idea that a white man was being railroaded for the murder of a black man for political reasons is both extremely unlikely and shockingly offensive. As if there was no other reason someone who has killed a police officer, and admitted to it, might be up for a death sentence? Combine this with several racist slurs used later in the film, and some nativist and xenophobic comments, and you have quite an offensive stew.

Secondly, the premise of the movie is that Hildy wants to get out of the game and live a normal life, but her ex-husband Walter doesn’t want to let her. He does everything to make sure she falls back into her old habits. And by everything I mean including getting her fiancée thrown in jail several times, for theft, solicitation, and possession of counterfeit bills. He cheats, he lies, he steals, he commits fraud, and he does it all so Hildy will forgo her chance at a way out. This is her ex-husband, who the film makes very clear was a terrible spouse.

The premise of a screwball comedy, is that the amorality of the lovers doesn’t matter, because they are so clearly meant to be together. Which means either Hildy is just as awful as Walter, in which case why the hell am I watching this, or she’s not, in which case he’s a monster who is manipulating an addict into a relapse. Either way, it doesn’t exactly make for happy viewing.

Ok, so then why don’t I just hate this film and be done with it? For two main reasons. The first is the dialog shines in a way that I cannot remember seeing in any other film, with the possible exception of Sweet Smell of Success. It’s just so damned witty, so funny, so quick, and so insanely layered. It’s a marvel. The film is cool, in a way only something with this mixture of actor’s mid-Atlantic accent and hardboiled newsy dialog could be.

The second thing that draws me into the film is the incredibly strong character of Hildy Johnson, for most of the film at least. She knows what a scumbag her ex-husband is and foils him at almost every turn. She knows the world she’s living in, and she’s prepared to make her place in it, sexism be damned. It’s a powerful statement, especially for a film from this era.

The problem of course, is by the end when she falls back into her old life, it completely undercuts all of it. She’s suddenly hanging on Walter like a puppy, and allowing him to treat her as terribly as he always has. It’s depressing. So, ultimately, I didn’t like this film at all, except for when I did. Yep, cleared that right up. - Jan 24th, 2019