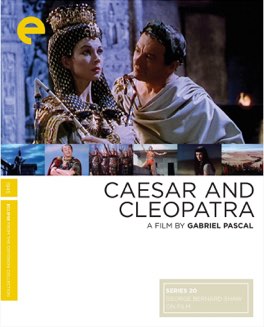 Worse than bad, this was boring. With a confusing and possibly terrible message, and some truly horrific acting and dialogue. What a miss.

I’m on a bad streak picking films to watch. I chose this one because of how much I enjoyed the previous entry in the set, Major Barbara. On top of that, I find both Roman and Egyptian history fascinating, so I figured a historical drama involving both would be right up my alley.

Unfortunately, this is about as far from my alley as can be. This is the story of... something, I guess. The conquering of Egypt by Julius Caesar perhaps? The ascension of Cleopatra to the throne of Egypt? According to what I’ve read, this was an attempt by author George Bernard Shaw to comment on English affairs of the late nineteenth century. In that case, I must confess that I completely missed whatever point the original play was trying to make.

Mostly, my thoughts as I watched this bloated nonsense nothingburger strayed to a different topic. Why is it that whenever an American film takes place in the past, everyone suddenly has British accents? Why do we equate history with being British? That’s obviously not a question for this film, which is actually British, full of British actors, and, incredibly questionable casting of supposed Egyptians aside, it makes sense that everyone is therefore speaking in a British accent.

But the question still remains. Why do we think everyone in the past spoke with English accents? My best guess would be because our own shared past is ostensibly British, as a former colony. Therefore English accents remind us of the past in some fashion?

Anyway, when the best thing you can do while watching a film is to think about something only barely tangentially related? That’s really not a good sign for the film you’re actually watching. - Aug 18th, 2020