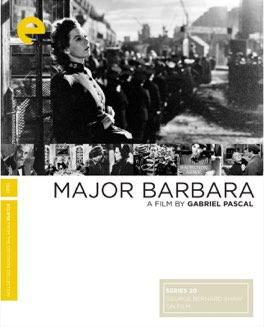 A fun and random film. It has a quirky weird vibe that I really enjoyed, and the message was interesting as well. Can’t really ask for much more than that.

I watched this so soon after I Know Where I’m Going! because I have become completely captivated by the acting of Wendy Hiller.

I liked her in Pygmalion all those years ago, but somehow didn’t realize just how much until now. It’s one of the nicer aspects of this whole project, discovering talented people from the past that I would never have otherwise been exposed to.

I get a thrill when I see them pop-up in other films, and even sometimes go on a journey to watch all I can from them. That’s what happened this time.

This is a super goofy film, much more so than the others I’ve seen her in. It works just as well. There’s something in her earnestness, combined with a bit of weirdness, that really shines.

I can’t imagine anyone else playing the titular Major Barbara with anything like the honesty she does, and without that this wouldn’t work half so well.

The message of this film, that we must feed the bodies of people before we worry about feeding their souls, makes a ton of sense to me.

The film is a critique of organizations like the Salvation Army, which help people, but mainly try to give them the hope of a better life after death. That sort of mission of resignation has always infuriated me.

There is just no reason that anyone, anywhere, should be going to bed hungry at night. There’s certainly no need for it. There is more than enough food in the world to feed everyone. It’s just a problem of distribution and logistics.

We’ve been convinced that basic necessities should be tied to the rules of our economic system. That’s not a default position. Capitalism would function just as well, or poorly depending on your point of view, if everyone had enough food to eat.

To expect to bring anyone ideas about greater meaning, or some notion of “salvation,” when they’re hungry, it’s beyond me. - Oct 21st, 2019