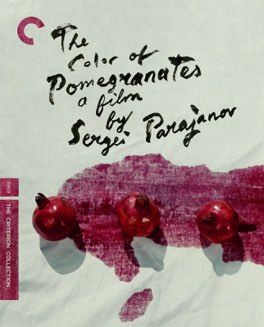 The Color of Pomegranates

Undeniably beautiful, but also frustratingly obtuse. I had absolutely no idea what was going on, and I didn’t particularly enjoy much of what I saw. This was a miss for me.

As I’ve mentioned before, I find allegory to be a particularly tricky narrative style.

It relies so much on the viewer understanding the intentionality of the filmmaker. If the two can find a connection, even a misplaced one, magic can happen. As is often the case with me, however, I have no idea what’s happening and therefore lose any interest.

The same thing can happen with experimental film, but the difference is that allegory appears to want the audience to figure it out, which can create a sense of frustration.

With experimental film, whatever I might find in it feels like a win. With allegorical film I’m just annoyed at having no idea what the director wanted me to even look for.

This is a strongly allegorical film. It tells a loose version of the story of Sayat-Nova, an eighteenth century Armenian troubadour.

Instead of pursuing any kind of direct narrative structure, the film attempts to recreate the poetic world of the man himself. His story, boiled down to just its essentials, is presented as a serious of tableaux, each attempting to make you feel the beauty of his work.

It’s a cool idea, but in practice I found it completely impenetrable. Part of that stems from the fact that I was unfamiliar with the work, or life, of Sayat-Nova.

That’s not the director Parajanov’s fault, his intended audience in the Soviet Union would have been very familiar with the subject of the film. I wonder how I might have reacted watching a similarly styled story about someone as well known here.

But even in that situation, the level of encoded meaning in this film would likely baffle me. This is very short, but is accompanied by a ton of special features attempting to contextualize and explain what we’ve watched.

It represents the mission of Criterion as a film school in a box perfectly. Through the special features I learned about the life of Sayat-Nova, but also about what exactly each section of the film was attempting to convey.

It’s cool that every single little detail has an allegorical meaning, but I cannot believe that anyone other than Parajanov would be able to figure it all out.

I guess some people must either enjoy the journey of attempting to piece it together, or not care and just enjoy the pretty pictures. I wasn’t part of either of those camps, and so this was mostly just a chore for me. - May 26th, 2019