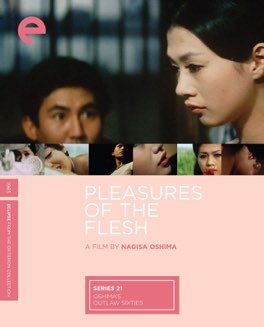 A surprisingly different film than was described on the tin. Deeper, and far more enjoyable. I’m very excited to see where Oshima went from here.

Pleasures of the Flesh

I put off watching any of the films in this set for a long time. Partially it was because of the title, and partially it was because I really didn’t enjoy In the Realm of the Senses. As usual, it was a mistake to assume because I didn’t like one film from a filmmaker, I wouldn’t like another. As it turns out, I liked this one quite a bit, and now I couldn’t be more excited to watch the rest of the films in this set. I love it when that happens.

This is described on the back of the box as being Oshima’s attempt at a pink film. While that’s strictly speaking probably true, it’s misleading at best. Pink films are the term used in Japan for films with nudity, or that deal with sex. On that level, the “dealing with sex” level, this film certainly qualifies. But this isn’t really a film about sex in any meaningful way. Certainly almost none of the characters are particularly enjoying any sexual contact that happens, and all of that happens pretty far offscreen anyway.

This is a film about expectations, happiness, assumption, life. It tells the story of Atsushi, a young man, who is obsessed with a young lady he tutors. She’s from a different class then he is, and so he has no real chance of ever ending up with her. He does love her though, to the point that when a man from her past comes and blackmails her family, he kills the man for her grateful parents. Unfortunately someone witnesses his murder, and uses it to blackmail him in an unusual way. The man, a corrupt public servant, wants him to hold onto a huge sum of money he has embezzled.

The idea is, our guy will hold on to the money while the official does his prison sentence, allowing him to come collect it when he gets out. But, a year before the due date, Atsushi learns his beloved has married another man. He decides to take the money for himself, and go on a spending binge, with the idea he’ll kill himself when the year runs out. He uses the money to pay for women to let him live with them, shifting from woman to woman as the situation inevitably goes sour.

It’s sort of like a very twisted Brewster’s Millions, where no one is enjoying anything. Atsushi picks women that remind him somehow of the one that got away, but they aren’t her, and they don’t love him. He buys their time, but he can’t buy their feelings, and they always have baggage he hasn’t accounted for. He doesn’t even really seem to even enjoy their time, finding the whole thing shallow and meaningless.

Basically he has a lot of offscreen sex, and that’s about it. The whole thing feels like it just makes him sadder and sadder. It’s an interesting commentary on the emptiness of perceived gratification. - Jan 6th, 2019