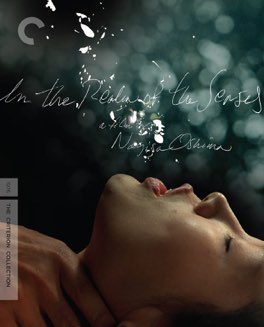 Not a film I have much interest in seeing again. It’s provocative, but ultimately hollow. It’s well made, but it has little to recommend it other than its notoriety.

In the Realm of the Senses

It’s an interesting question, for someone writing about films that are often decades old. What to do when their primary claim to fame is that they wanted to shock people? Most often, the shock is either blunted by the passage of time, or by the distance between me and the intended audience. This film is certainly an example of the latter. It may still be shocking in Japan, where it has never been seen uncut. But to my eyes, this is mostly uninteresting territory. Brazen perhaps, but that’s not enough. Instead, I find myself looking for the underlying message of the film, to see if there’s anything there to grab hold of.

This is a fictionalized account of something that really happened. In 1936 a woman named Sada Abe began working at an inn owned by a womanizer named Kichizo Ishida, who was much older than she was. The two of them began an illicit affair, which lasted for about a week, during which time they primarily drank, and had sex. At the end of the week, Sada choked Kichizo to death during erotic asphyxiation, severed his penis and kept it with her, and was arrested and imprisoned for his murder. The film stretches this timeline from a week to six months, but otherwise remains essentially faithful to the actual events. The film is extremely explicit, and features the actors actually having sex with each other.

As can be expected for a film with that description, a lot of the controversy around it has focused on the line between pornography and art. I’m almost totally uninterested in that dialogue. I see absolutely no reason why a film can’t be both pornography and art, or why I should care which one it is. It seems like a distraction from what the film is actually about. The one part of this discussion I do find interesting though, is the status of the film in its native Japan. This film is not particularly obscene, or titillating. It’s not intended to arouse. But by showing it in a censored fashion, it becomes illicit, which gives it a sexual charge that wasn’t intended. Watching it uncut makes it very clear that the point isn’t eroticism.

Instead, this is a film about the destructive power of addiction. You could just as easily tell this same story with two people who are abusing Heroin. In fact, better films have been made that do just that. These two lovers are spiraling further and further into their high, and like all highs it takes more and more over time to achieve the same results. This film is a purely prurient take on a subject matter that has so much more potential. The nature of human addiction, the destruction of obsession, and the toxicity of certain relationships. Unfortunately, the film spends so much time reveling in being explicit, it only superficially explores its intended message. - Nov 21st, 2016