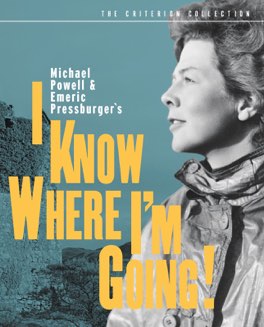 Another film by The Archers that fills my heart with light and happiness. One of these days maybe I won’t like one of their films, but not today. This is so great!

I Know Where I’m Going!

There is something I absolutely love about romantic comedies from the 1940s. It’s a certain kind of can-do attitude that I suppose comes with either being in the middle of a war, or just having won one. It’s a hard earned emotion to be sure, and not at all worth the pain it took to get it, but at least we have these films. This one in particular has a message I can wholeheartedly get behind.

This tells the story of Joan Webster, the classic headstrong young woman, who knows exactly what she wants out of life. Of course, the trouble with that, is that either you get it, or you realize that you don’t want it anymore. It’s an incredibly hard thing to realize that your dreams have changed, and even more so when you’re on the verge of getting what you thought you wanted.

That’s the situation with Joan, who has always wanted to be rich, and is about to marry one of the richest men in Britain. All she has to do is get to the island where the wedding is taking place.

The idea that you need to follow your heart, even when it changes directions. The idea that there’s more to life than material wealth, and that people without aren’t poor, they just don’t have any money. The idea that a better world can be built on honesty and equality. It’s intoxicating. This is the point in time when all of that seemed, not just possible, but what was going to happen next. Watching from a cynical future, it’s so nice to see a simpler, more gentle time.

To believe again in the transformative power of love. To think it could save the world. - Oct 12th, 2019