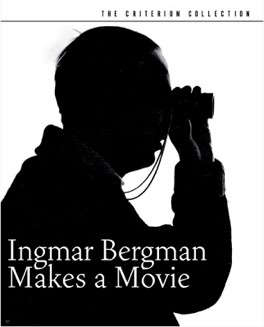 Probably only of interest to serious Bergman lovers, or people who eat up behind-the-scenes footage. I’m in the former camp, and so this was a treat for me.

This is a film about a film. Not only that but it’s also almost twice as long as the film it’s about.

Vilgot Sjöman, who I wrote about earlier this year, got permission from Ingmar Bergman to shadow the production process for Bergma’s 1963 film Winter Light.

What resulted was a five part documentary series initially created for Swedish television, but now collated into a single movie.

It’s not the type of thing I would imagine I would enjoy watching, but I was completely enthralled.

Perhaps it seems odd that I assumed I wouldn’t like this. After all, Bergman is by far one of my all-time favorite directors. Plus, I write about movies, why wouldn’t I enjoy getting a behind-the-scenes look at one of them?

As it turns out, I am not generally all that into process oriented looks at the making of movies. I’m not sure why, but as far as I can tell it’s something to do with not wanting to destroy the illusionary world of the film.

If I know exactly how everything was done, if I know the actors as people instead of characters, it somehow detracts from the film itself.

I imagine that’s an atypical view for most people who watch as many movies, and are as invested in the art form, as I am. I don’t know.

What I do know, is that the actual behind-the-scenes portions of this film were the least interesting parts. Watching the endless rehearsing, or debates about blocking, or how they were going to build and light the church.

They weren’t devoid of interest, but they were by far the parts where I started to question why I was watching this at all.

What saved it, what made it absolutely worthwhile, were the long conversations between Sjöman and Bergman.

All of it was fascinating. I would have happily watched another few hours of those discussions. - Feb 17th, 2019