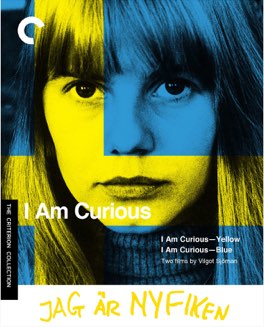 This is less of a companion, and more of a mirror universe reimagining. If I had to choose a reality I’d pick this one, but luckily I get to just enjoy them both.

As I mentioned when discussing the first part of this two part set, shock value is a funny thing.

When that film came out, it was seized by US customs agents, and the release was held up for several years while courts decided if it was obscene or not. The end result, is by the time it was all resolved, this film was almost completely ignored.

That’s a real shame, as it’s worthy of consideration in its own right. I think I liked it more, and understood it less, if that makes any sense.

This was apparently originally intended to be one long film with Yellow, but I really don’t see how that would have worked. This isn’t a sequel, or a prequel. Instead it’s like a re-imagining, with some of the same characters and some of the same general structure, but most of the specific details changed.

This is a much more straightforward film. It has its own share of line blurring between cinema and reality, but it’s subtler, less jarring. Mostly the story consists of Lena on a journey of self-discovery, possibly coinciding with her finding her mother, who abandoned her as a child.

This time around the topics of interest have changed as well. Instead of the first film’s total focus on social class hierarchies and political issues, this is more about religious, sexual, and criminal concerns.

Lena takes a sex-ed class, interviews people about issues around Church and State, and visits the sites of various maximum security prisons.

I’m not sure what the point of this was, other than a continued examination of this particular person and this particular time. If that’s all it was meant to be, that’s fine with me, as I thoroughly enjoyed it.

It can be hard with polemical films to ascertain their motivations even if you are a part of the society and time they’re discussing. To try and do it fifty years later is much harder.

Still, this was just as revolutionary as the first film, and quite a bit more coherent and fun. - Jan 10th, 2019