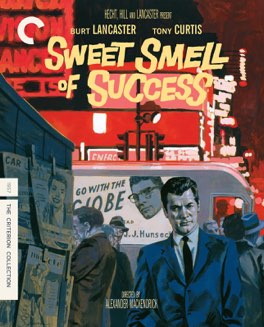 It’s an incredibly potent mixture. And it comes together in an explosion of cool dialogue, beautiful cinematography, and incredible performances.

This film is cool. The dialogue is impeccable, the fashion is stylish. The cinematography is so expressive, the story so utterly bankrupt of moral character. This is a film full of characters vulgar and mean, but always cool. What a treasure this is, this relic from a previous era, such a perfect example of the last dregs of the jazz age.

The story here, as far as it goes, is basic. A man with no scruples, the excellent Tony Curtis, trying to make a name as a press agent, or really as anything at all. Burt Lancaster as a famous columnist, based on Walter Winchell, who can make or break anyone with a sentence. The dog eat dog world of late 50’s Manhattan, ready and able to chew people up and spit them back out. And the columnists younger sister, who just wants to be left alone to be happy with the man she loves.

The plot follows a fairly predictable path as everyone, and no one, get’s what’s coming to them. But it’s the conversations, and the little moments, that make it so great. The way that, in the midst of all the corruption, at least one newspaper man is honest. Well, honest, sure, but only after having cheated on his wife and nearly gotten an innocent girl fired. I have no idea if it’s true, but I have to imagine this film was a huge influence on Jean-Luc Godard, especially when he was making Breathless. That film owes so much to this one, with its own cool but despicable lead, and its equally fitting ending.

There really isn’t that much else to say about this film. I keep repeating it, because it’s so true, this film is just cool. Everything about it is unselfconsciously stylish and affected. I usually dislike movies where everyone is more or less bad, but not here. Because if you’re going to be bad, at least be cool, and these characters are just so damn cool. - Mar 21st, 2014