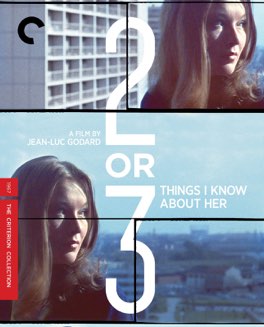 I enjoyed this slightly more than Made in U.S.A. The story was less clichéd and I don’t think I’ve ever seen prostitution presented this coldly. Still, it was a struggle to get through.

2 or 3 Things I Know About Her

I’ve come to the conclusion that I just don’t enjoy deconstructionist cinema, or at least this deconstructionist cinema, very much. If Jean-Luc Godard was tired of narrative filmmaking, why should I invest in the semi-narrative film he made? I have a feeling I won’t enjoy the rest of his late sixties output either, he has traveled past the point where I can find enough to latch onto to invest in his work.

I know he took a long break after that, and I’m curious to see what he’s done since he came back. I’m curious about his other late sixties work too, even though I’m expecting to enjoy it as much as I enjoyed this.

This is the story of a housewife named Juliette who has a husband and two kids. They can’t make ends meet with his job as a car mechanic and so she also works as a prostitute. The film shows a single day in her life as she travels around Paris, meets clients, and does errands. The pieces of the film that show her interactions in the world are the parts I liked the best. Surrounding this story we have Godard narrating an essay about... something. I was honestly not invested enough to figure out what. We also get the various characters speaking to the audience about all manner of things, as well as a bunch of random moments that may or may not tie into the story at all.

This sort of exploration of semiotics is somewhat intellectually interesting, but it doesn’t make for an engaging movie. It also feels like a very basic discussion of symbols and signs, lacking in any real depth. The non-linear nature of the story feels haphazard and thrown together. The structures and demands of narrative filmmaking were clearly a hindrance to Godard at this point, and it feels like he really wanted to commit to experimental non-sequential cinema but hadn’t, or couldn’t.

There’s an interesting film in here somewhere, probably more than one. At it stands, I find some of the questions raised thought-provoking, but the total is less than the sum of the parts. - Jan 14th, 2019