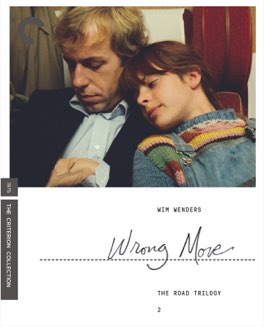 A beautifully shot film, with a weird and deceptively complicated story. This is the weakest of the Wenders films I’ve seen so far. Still, there was much to enjoy and think about.

The German title for this film is Falsche Bewegung, which literally translates as wrong movement. At various times the English translation has been The Wrong Move, The Wrong Movement, and now Wrong Move. Given Wenders penchant for subtle wording in titles, e.g., Der Himmel über Berlin, I’m very willing to believe this is an intentionally ambiguous name.

It points to what the film is about, that is, how does one grow? How do we get the experience we need of life and the world?

This film follows a young man named Wilhelm who wants to be a writer. His mother buys him a train ticket from his hometown in the north of Germany, to the then capital city of Bonn. She tells him to go out and see the world, so that he can be a good writer.

Along the way he meets an old grifter and his teenage mute street performer friend. He also meets a semi-famous actress who he is in an immediate mutual captivation with. They are joined by a wannabe poet, and together the group heads on a trip across the country.

This is a film about making poor choices. It’s about heading out on a journey of self discovery, but ignoring that so much of that journey has to be internal to yourself.

The wrong movement in the title is literal and metaphorical. Virtually everything Wilhelm does is wrong. He befriends the wrong people, he treats them wrongly, he moves on when he should stay, and learns almost nothing.

At the same time, the real issue is the movement inside himself. He is clinging to an idea he has of what a “writer” is, while failing to allow himself to grow. There’s a valuable lesson here, and one I know I can use.

We should all pay a bit more attention to our inner self, in addition to whatever external situations we are in.

There’s one other thing I want to discuss. The actress who plays Mignon, the mute street performer, is Nastassja Kinski, in her first film role. She was twelve at the time.

There is a scene in this film in which she appears topless, attempting to sleep with Wilhelm. I cannot fathom how that was considered an acceptable role for a twelve year old child to be in.

I’ve read interviews with Kinski where she discusses her lack of self esteem, and other factors that lead to her doing these roles, mostly a complete lack of adult supervision in her life.