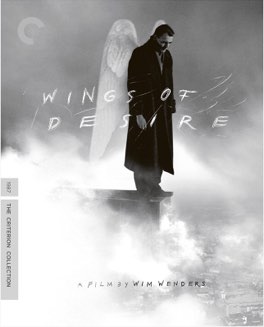 An incredibly beautiful and moving film, and one that spoke to my experience of the world around me.

This is a really complicated film, both to discuss and to think about. It’s largely lacking in conventional narrative, and yet ultimately has a distinct and compelling plot. It’s at times vague and distant, with strands of life wandering all around, and yet it becomes increasingly specific and direct. It’s powerful, depressing, hopeful, sad, and happy. It’s full of big ideas like longing and love, and small ones like how to get through the day. It’s painful to watch at times, and yet left me feeling refreshed. In other words, it’s a work of art.

The film takes place in Berlin, a few years before the fall of the wall. The city goes about its business, unaware that all around are angels watching over everything. This is a version of angels I hadn’t ever seen before, one that has them as silent testimony to the goings on of the world. They watch over us, occasionally influencing us in positive directions, or taking away our pain, but mostly they just watch. The story focuses on two angels in particular, Damiel and Cassiel, who compare notes about all the things they’ve seen. As the film progresses, Damiel falls in love with a young circus performer named Marion, which forces him to decide between an eternity as a watcher, or a normal human life.

The story follows a narrative path I also haven’t seen before. The first hour and a half are almost a documentary of life in Berlin. There’s virtually no conventional plot at all, but rather a serious of vignettes as the angels experience the people of the city. It seems like something that would get boring, but it never really does. It ends up being a great way to give the viewer the feeling of life, in all of its myriad forms, and specifically life in a place as a complicated and divided as pre-fall Berlin. In the same way Damiel is conflicted about his future, so was the city itself. It’s never explicitly discussed, but it looms over absolutely everything.

The film dramatizes this concept of choosing between distance and love brilliantly. When the angel’s perspective is shown the film is in black and white. When the humans perspective is shown the film is in color. Not only does this make for a beautiful film, but it also says something I found very interesting about the nature of our existence. The angels can only see things in black and white, because they are only observers. They cannot perceive the color of things, because they cannot be a part of things. They are living a strange existence, where they are near the world but not a part of it. Almost like ghosts.

This is something I can relate to very strongly. In my own life I’ve often been a watcher. I’m someone who loves to sit back and observe the play of life in front of me. At the same time, I’m also someone who wants to get involved. I’ve struggled with finding a balance between the introverted and social parts of myself for my entire life. There have been many points in the past where I’ve thought I might finally tumble over the edge into pure distance. The thing that stopped me was the same thing that changes Damiel in the film, and that’s falling in love. I cannot be removed from life and be with my love, and so I’ve chosen to engage rather than retreat. It’s the reason the world is so full of colors. - Jun 21st, 2016