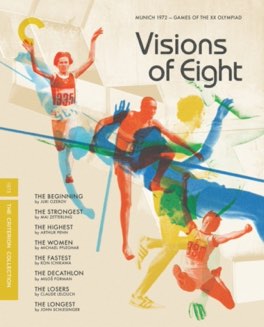 My least favorite entry so far. Partially because of the choices of what to include, but also how everything is shown. This one is a serious miss.

As I’ve been watching these Olympic films, I’ve seen a lot of different approaches to how to make something compelling. I’ve written about this extensively at this point, and it remains fascinating to me to see all these different approaches to the same problem. On the surface this entry should be especially good for this, as it’s not a single director film. Instead, the job of chronicling the 1972 Munich Olympics went to eight different directors, who each did a segment on one aspect of the games. Unfortunately, all eight seem to have very similar ideas on what will make a good film, and almost all of them are wrong.

One of my favorite documentaries in this series, maybe my absolute favorite, is Kon Ichikawa’s Tokyo Olympiad, which covers the 1964 Tokyo Olympics. It’s a triumph of little details, not particularly concerned with things like winning and losing. It’s an artistic masterpiece, and definitely illustrates one successful path to a great Olympics film. Given that this film largely tries to mine that same territory, all the way to having Ichikawa himself do one of these segments, it’s somewhat surprising that I didn’t really like this film at all.

The segments just don’t work. They’re either boring, or feature very outdated ideas of women’s representation, or are incomprehensible. Only the first one, about the weightlifters, really captured my heart at all. In that case it’s just because I find weightlifting to be a hilarious sport, and so did the director. The rest of the segments were about things I actually like and the film absolutely failed to capture them in any way that could do justice to the events themselves. It’s especially galling when you consider that this particular Olympics had some pretty serious athletic achievements happen, none of which are shown or discussed at all. These films should provide us with an idea of what will be remembered from a particular games, and this failed spectacularly to do that.

My other major criticism is the almost total lack of discussion in the film about the events of the Munich Massacre. The final segment does cover the details a little bit, but insanely uses them to illustrate the difficulty of running the marathon under the circumstances. To trivialize the murders of eleven athletes and one policeman as a potential distraction for an athletic competition is tasteless to the extreme. I’m not saying the entire film should have been about the events of the massacre, but to completely ignore it, and when discussing it immediately tonally shift to celebration, is just so weird and uncomfortable. It absolutely ruins the film for me. - Dec 29th, 2018