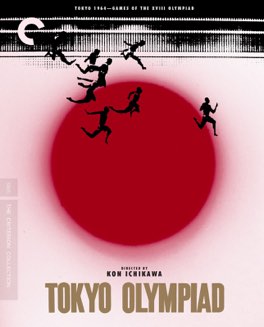 An astonishing take on how to capture an Olympic Games. Less concerned with wins and loses than with the spirit of the games, this is a must watch for anyone who loves the Olympic movement.

There’s something you should know about me; I’m an absolute nut for the Olympic Games. Every two years, for those two weeks, I lose interest in almost everything else in the world. I try to watch as much as is reasonably possible, without discrimination as to which sport I’m following. I’m not sure exactly why I find the whole thing so immensely captivating, but perhaps it’s the theme director Kon Ichikawa found in this incredible documentary. The Olympics are the closest thing we have to a working model of world peace. Certainly there’s something wonderful about people cheering for their country without destructive nationalism, at least there is when that’s what happens.

As NBC continues to test my ability to overlook its jingoistic commentary and packaging, it was overwhelmingly refreshing to look back at this portrait of a simpler time. Every Olympic games since the modern reboot began in Athens in 1896 has had an official documentary made for it, but very few of them rise outside the confines of their limited role as chronicler of the event. This is one of those very few, and it does so by almost exclusively not caring about the results of the games, or about trying to capture sport in the television friendly form we’re used to it. Ichikawa is clearly totally uninterested in medal counts, or even sometimes the sports themselves, but rather in the people behind the sports, and in what sport can be as a metaphor for a coming together of the world.

Instead of focusing on who won what, or how, he focuses on the little details he finds. The feet of the marathon runners, the movement of gymnastics, the raw effort of the shot put. By narrowing our field of vision, often we can’t really even tell if the athlete does a “good” or “bad” job, he allows us to instead see just how much work, grace, power, and beauty goes into being a world class athlete. We are constantly reminded that these athletes have lives and jobs when not participating in these Olympic Games. Some are teachers, some are mechanics, some are accountants. We see a vision of the Olympics as originally intended, of an amateur athletic meet designed, not for money, but to foster international cooperation and understanding. It’s about as divorced from the slickly produced patriotic propaganda we get today as I can imagine.

NBC has been rightly criticized for their coverage, it’s been horrifically bad. So totally focused on American achievement as to ignore completely the point of these games. It makes me even more sad, given my admitted obsession with the games, that I cannot imagine a child finding joy and wonder in their prepackaged garbage. Some of my earliest memories are watching the Olympic Games with my family, this is an event that has a meaning for me, and it’s tragic to watch it be covered this way. I’m incredibly hopeful that the ratings and scorn NBC has received will encourage them to rethink things as we head to the 2018 Winter Olympic Games in Pyeongchang. Even with the modern professionalism of many of the sports involved, I still think the Olympics can be a monument to a vision of peace and harmony in the world.

This documentary is exemplary, and I would love for as many people as possible to be able to see it. Unfortunately, the director’s intended cut of the film has been out of print for a long time. Typically, when a Criterion film is out of print, it’s because the original rights holder has decided they can make more money releasing it themselves, and we at least get a non-Criterion package. In this case, however, the original rights holder is the International Olympic Committee, as labyrinthine an organization as I know of. Their involvement means it’s extremely unlikely we’ll ever see this film come back into print, let alone get an updated Blu-ray edition. Luckily, there is at least an officially sanctioned, if unfortunately shortened, version available to watch on YouTube. I highly recommend anyone who loves the Olympics watch it, and if you ever get a chance to watch the full thing I would highly recommend that as well. - Aug 14th, 2016