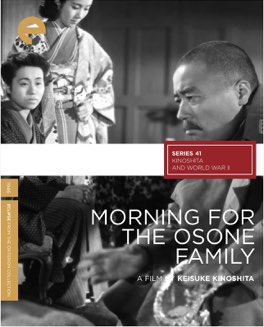 Morning for the Osone Family

While a bit on the nose and preachy, this also had moments that felt incredibly powerful and real. It’s a shame to end the set on a lesser entry, but this was a journey I’m glad I took.

The rest of the films in this set were made while Keisuke Kinoshita was under wartime Japanese censorship laws. This film, made after the war ended, fell under American occupying forces censorship laws.

In some ways, the films Kinoshita made under Japanese laws feel more interesting, at least in the sense that they were forced to tell their stories in extremely oblique ways. This film could be much more direct in its anti-war values, and while I agree with those values, the film loses something as a result.

The story is of one family during the war, and everything bad that happens to them as a result.

The film opens with the arrest of the oldest brother for writing a vaguely anti-war paper. From there we see the ultra-conservative military general uncle of the family forced to move in, and the resulting effect on the mother, daughter, and two remaining sons.

It’s a rather bleak story, with very little in the way of positive outcomes.

I’d bet making this film felt like a similar morning for Kinoshita himself. After years of straining against the censorship laws, and after having been effectively baned for making his previous film, the comparative freedom must have been incredible. The dialogue he could suddenly participate in, of how to re-build Japan after centuries of destructive militarism, sounds like a fascinating time to work in.

Other than the tacked-on American happy ending, this is an interesting start in that process, even if it’s ultimately not an overwhelming success. - Jun 18th, 2018