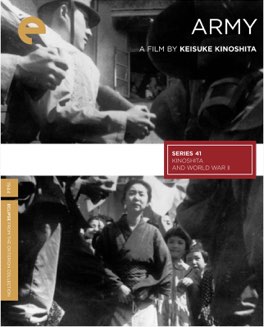 Most of the film is straightforward propaganda, but it all pays off with a heartwrenching ending. There are some really big and interesting ideas here, if you can look past the surface level warmongering.

The story follows one family from the middle 1800s to the beginning of World War II. At every stage, the various members of the family are either soldiers, former soldiers, want to be soldiers, or believe their children should be soldiers. Most of the plot is centered around the idea that fighting for the emperor, and dying, is the only thing that matters in a young person’s life. If they happen to survive their war, then they can worry about anything else.

There is much discussion in the film that parents must give their children to the emperor, to the state. That their role is to raise good and obedient soldiers, but that they have no claim on those children once society needs them. It’s an incredibly fatalistic and destructive belief. These parents are heartbroken, of course, but cannot envision another way. The bonds of their society are in conflict with the natural bonds of their emotional connection to their offspring. It’s immensely powerful, and not at all in the way the censors expected.

This film is the last one in the set that was still subject to the wartime Japanese censors. Kinoshita’s previous film, Jubilation Street, had expressed an ambivalent view on the war, and the nature of wars in general. This film is even more expressive of a disagreement with nationalistic military ambitions, but it’s kept almost entirely to the very ending of the film. The script itself couldn’t make any mention of what Kinoshita had in mind for the ending, for fear the censors would never allow it. Kinoshita was right to worry, he wasn’t allowed to make another film while the war was still happening. - Apr 12th, 2018