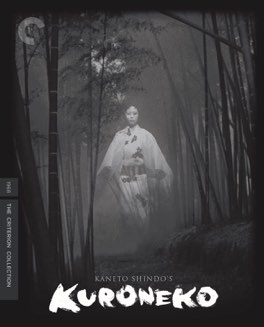 A fun film, if a bit slow at parts. There’s something really creepy to it, that I definitely enjoyed. Mostly though, its vision of the world compelled me.

This is a perfectly entertaining and somewhat inventive horror film. The plot, which concerns a mother and a daughter who die at the hands of roving samurai, and come back for revenge thanks to their cat, is a decent one. The effects are good, the cinematography is good, and there’s a nice bit of a twist involving the son/husband of the pair being assigned the task of putting an end to their reign of terror. All in all, it’s a nice film that I enjoyed watching. That’s not what I found interesting about it.

This film doesn’t. Kaneto Shindo, its director, came from a family of prosperous farmers. As a child he moved to the city, when his family went bankrupt, but he never lost that farming heritage. For the farmers, the samurai represented nothing but tyranny and contempt. They came around, did whatever the hell they wanted, and took whatever they fancied. This film exists at the caste level of the farmers, and it presents the samurai, all of them, as being nothing but trouble. All the samurai in this film are considered to be a blight on society.

It makes a fascinating comparison with the previous film, Three Outlaw Samurai. That film came from almost the exact opposite perspective. It presented the farmers as weak and useless, unable to stand up for themselves for more than a minute. The samurai were presented as a level above, with a contempt for the average farmer that was palpable. It’s a stark dichotomy. It takes what is otherwise merely a decent horror film, with some nice visual effects, and a cinematic sense of editing, and it elevates it to an interesting statement on society. - Aug 11th, 2018