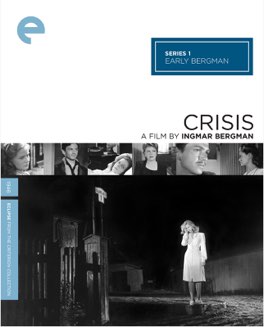 Not a great film by any stretch, but there is enough here that I enjoyed watching it. The climatic scene must have been legitimately shocking for its time, it’s still pretty shocking today.

Much like his first produced script, this is not a great film. There isn’t all that much of the later genius of Ingmar Bergman on display. Most of what there is, is imbued in the character of Jack, who gets all the best lines in the film. There is one scene near the end, the climax, pun intended, of the film, which definitely hints that greatness is on the horizon. In a weird sort of way it’s comforting, to know Bergman wasn’t fully formed out of the head of Zeus. He had to hone his craft over time. Somehow it makes him more approachable.

This film tells the story of Nelly, an eighteen year old woman living in rural Sweden with a guardian who is standing in for her biological mother. As the film opens her birth mom Jenny has decided she can finally take care of her daughter, and has come to try and convince her to move to Stockholm. She is accompanied by her younger lover, the aforementioned Jack, who she claims is her half brother’s son. Jenny and Jack bring an element of chaos to the otherwise staid town, and things only get worse when Nelly decides to leave the town to try her luck in the big city.

The ending of this film has Nelly realizing she hates the big city, and moving back home where everything is exactly as it was before she left. It’s a conventional and conservative way to end the film, but Bergman does play with the theme a little bit. Before Nelly left, she was being pursued by a man twice her age, and he had already proposed to her multiple times. Her mother, and her aunt, both wanted her to settle down with this man, but she had made it perfectly clear she thought he was too old for her. In a more conventional film she would have realized that he was stability and love, and fallen for him. In this film she tells him that she’s glad to be back, but still not interested in him. It’s a nice subversion of expectations. - Dec 26th, 2018