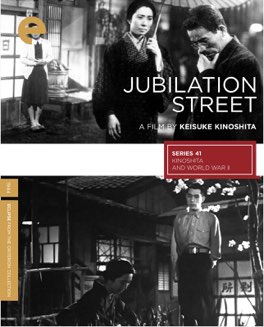 This appears to be an attempt to subvert the wartime censors of Japan. It’s a minor work, perhaps, but a fascinating one.

This is the first time I’ve watched a film included with an Eclipse series where the unrestored quality hurt my enjoyment. For much of the film there are serious sound issues, and they really detract from what Kinoshita is trying to achieve. That I was able to persevere past that is a testament to what a remarkably interesting film this is. Interesting for the exact reason it’s included in the set; its a film made under Japanese censorship standards during World War II.

The film tells the story of a small neighborhood in Tokyo, that is set to be demolished by the government for wartime purposes. All of the residents of the neighborhood, most of whom have been there for decades, are now being forced to leave. The different people in the story all have varying ideas of where they want to go, and how they want to deal with their fortunes. There is a ton of melodrama, and a lot of subplots.

Most of the writing about this film I’ve seen has come down harshly on it as a boring, minor, work, primarily of propaganda. Certainly this is strictly speaking a work of propaganda. There are moments in the film where characters say absolutely ridiculous things directly to the camera, that are clearly there for the purpose of enhancing public support of the war. But to my eye, this film is attempting at all points to bely that very dialogue.

This is a story of the chaos and sorrow being wrought on the population as a result of war. Other then the most blatant moments of nationalistic language, the entire film reads as ambivalent at best, and likely opposed to the conflict. The way the camera moves, the way the shots are structured. The story it’s telling of pain and sorrow. The mood that’s created is focused almost entirely on the damage being caused. There is a moment near the end that most typifies this to me. A character has been killed, more or less for military reasons, and while we see another character thinking about them there is the sound of distant gunfire. It’s a subtle thing to be sure, but it goes a long way. - Dec 6th, 2017