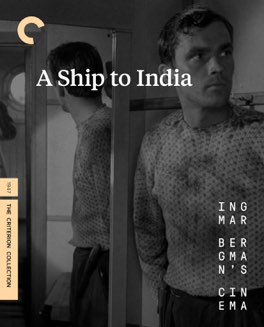 Still not masterpiece territory, as if that’s a common place for filmmakers to be. This isn’t amazing, but I found myself definitely enjoying it.

A Ship to India

This is less of a quantum leap forward in the career of Ingmar Bergman, and more of a gentle reminder of what’s to come. This, his third film as director, is better than the last one. It’s more self-assured, more focused on the themes Bergman would mine for the rest of his career. It smolders more than it simmers and it’s a bit all over the place, but I definitely can see the genesis of the genius at work. This process, of watching a great artist evolve, is always fascinating. Bergman didn’t arrive fully formed, and that’s what makes this look back at his early work so interesting.

This film tells the story of a young man who has one of cinema’s most loathsome fathers. His father is a liar, a drunk, a cheater, a misogynist, and has absolutely no love for his own son. As the film opens, we see Johannes come back to his home town after seven years on a ship traveling around the world. He’s come back to find a woman he left, and when he finds her she’s not exactly in the state he imagined she would be. The rest of the film tells the story of how he met this woman, and how he got away from the aforementioned terrible father.

Bergman loved to deal in family tension and drama. Mostly it was the long unspoken kind, where tensions linger only to eventually explode. Here the tensions are all entirely on the surface. From the very beginning it’s clear Johannes’ father is an alcoholic who has treated him and his mother terribly. There is absolutely no love lost between the son, his father, or the crew of the boat salvage operation they are working together. It’s in that relationship where the film feels like it has the least to offer. It’s not a bad story, it’s just a bit obvious and with little new.

What I found far more interesting was the relationship between Johannes’ parents, and specifically his mothers reaction to his father’s intention to run away with a mistress and leave her behind. She’s suffered in this marriage clearly. She’s treated terribly. The only thing that has carried her through is the idea that they will eventually retire to a little cabin on land, and now her husband means to take even that away from her. But the way she reacts, with the opinion that she should just be ok with anything that happens, is fascinating, if very dark. Her dialog with the mistress, and her conversations with her husband, are the most interesting parts of the film. - Dec 27th, 2018