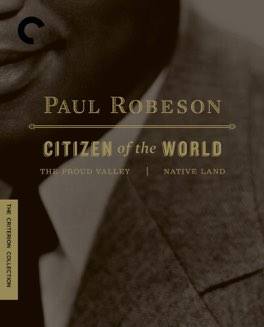 Another lovely film, that is made so much more by the presence of Paul Robeson. It was also nice to see something about the Welsh, who I don’t often encounter in these films.

In my essay about Jericho, the previous film in this set, I mentioned that what I found so special about it, was that it took a standard sort of film plot, and simply inserted Robeson into it.

His very presence, as an African-American man of his era, changed what was otherwise a pretty mediocre film, into something more worthwhile. The same thing happens here, but now we go even a bit further.

By the time this film was being made, Paul Robeson had fully embraced the humanist politics that would later get him in so much trouble.

This is the story of a Welsh mining town fallen on hard times. Robeson is an American sailor who has arrived in the United Kingdom, and is now looking for work. He meets a man who goes from town to town, singing badly, in order to be paid to stop. Unfortunately, or maybe fortunately, when Robeson’s character attempts the same, he’s still Paul Robeson, and so is immediately hired to join a miner’s choir.

He’s given a job in the mine as well, and this leads to his involvement with the people of the town, especially after an accident the mine down.

This is a tale of working class people, struggling to get ahead in the world. Ultimately it’s a nice story, with a fairly happy ending. More specifically, it’s an ending that preserves the status quo.

It was originally going to be so much more. From what I’ve read, the story started out far less happy, and far more honest. At the last minute the production company balked, and went down a safer, and less meaningful road.

This is Robeson finally on the brink, about to dive headfirst into his progressive politics. Films like this, and his speeches and concerts, scared the United States government enough that they denied him a passport for a decade.

They were that worried about what might happen if he traveled abroad, bringing the world’s workers together. If that’s the kind of power this man had, the least we can do is watch these films, and try to learn about it. - May 1st, 2017