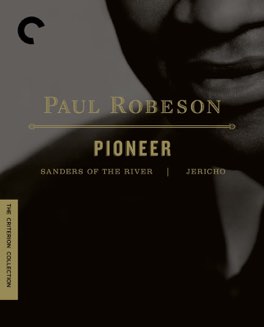 An extremely fun and enjoyable film. I was thoroughly entertained throughout, and any time I get to hear Paul Robeson sing, I’m a happy man.

This is hardly a monumental film. It’s plot isn’t particularly inspired, it’s acting isn’t particularly amazing. Taken completely on its own merits, it’s a good film, not a great one. It’s one of those solid features you watch, and promptly forget most of the details of by the next time you hear about it. It made me smile, and think nice thoughts. I enjoyed watching it. If that was all it had to offer, that would be fine. Its history gives it so much more.

This is the story of the titular Jericho, a non-commissioned African-American officer in World War I. He’s a strong willed, do the right thing, get along with all the men, kind of guy. Early in the film, the naval ship he’s on gets torpedoed, and during the ensuing fallout he both saves a bunch of lives, and accidentally kills a superior officer who tries to prevent him from saving lives. His punishment for this is prison, but during a brief moment unshackled, he escapes. The rest of the film follows what happens to him in freedom, and the fallout of his escape.

It’s all pretty standard action-adventure type stuff, with a romantic subplot thrown in, after he’s away from the army. It’s the facts surrounding it, that make it something more. The set includes it right after Sanders of the River, and that’s not a coincidence. This film is a direct response to the sense of betrayal Robeson had, after seeing how a role he was led to believe would be ennobling, was used to create a racist portrayal of African people. In response, he ensured his next film would guarantee more creative control.

What’s so important about that response, is all that’s changed is the lead is an African-American man. That’s it. You could take this exact same story, fudge a few details, do some racial swapping, and it would be a totally unimportant film. It’s important because it’s a standard action/romance story, with archetypal characters. It’s important because it treats the distinction around its casting as unimportant. Representation matters, and to have something like this must have been huge in 1937. It’s huge now, sadly. I’m really glad this exists. - Apr 28th, 2017