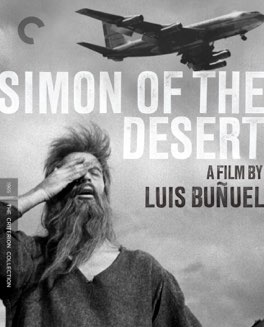 What a surprisingly entertaining and enjoyable experience this was. I loved just about everything about it, and I will absolutely return to it again.

Simon of the Desert

It’s amazing how much a bit of humor can change an experience for me. This film is, ostensibly, not that different from The Flowers of St. Francis. Sure, one film was made by a Catholic, the other by an atheist, but I find that those are two sides of the same intrinsically Christian coin anyway. It’s no exaggeration to say I hated Francis. As I wrote at the time, it was a chore to get through, and every minute of running time felt like an hour. It’s interesting then, that I absolutely loved this film.

This film was made, as I mentioned, by an atheist, Luis Buñuel. Ultimately, though, this is another film about an incredibly “pious” man who is attempting to live his live in total preparation for the afterlife. In many ways actually, the titular Simon is of less value to those around him. His standing on a pillar for his entire life is a moral example for the people in his life, but he’s not doing all that much to help them outside the occasional miracle.

The humor of the thing is what made this so wonderful. I can take a lot of moralizing, and preaching, if it’s also funny. There’s nothing antithetical to religion about humor. When we make our religious instruction totally devoid of laughter, we rob ourselves of one huge avenue for understanding. This is a film about our relationship to an afterlife, our relationship to sin, and the Christian relationship to the devil. That sounds awful to me, but sprinkle in a sense of humor and I loved every minute of it. - Dec 14th, 2017