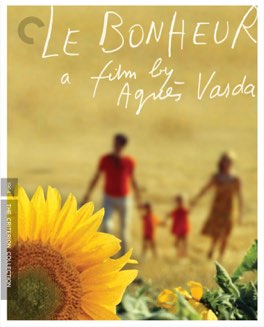 A beautiful and enjoyable film that I’ve spent a ton of time examining in my head. Ultimately, I’ve found more questions than answers.

In my recap of last year, I mentioned that I was taking a long break from Blogathons. I honestly didn’t think I’d participate in one this whole year. But when Movies Silently asks you to take part in a Blogathon celebrating women filmmakers, you say yes. I had a bit of trouble picking a film to write about. I’m working my way through the Criterion Collection, and they are criminally lacking in films by women. As it turns out this was the only film that met all the criteria.

The film tells the tale of François, a young man who is happily married, with two lovely children. His life seems almost totally idyllic, with virtually no conflict in sight. One day he meets a young postal worker named Émilie, and a short time after they begin to have an affair. François remains totally in love with his wife, simultaneously beginning a new love with his mistress. Eventually his wife asks him what’s made him seem so happy lately, and he tells her the truth. What comes after that is where this film is so shocking.

Agnès Varda is the only woman director who was part of the French New Wave. It’s no great shock that her characters are dramatically different from those of her male contemporaries. More than that though, just the fact that this story was written by a woman changes the way I understand it. Had Godard made this, the message would be vastly different. In that case this would be a male power fantasy, projecting the desires of a cheating spouse. In the hands of Varda it becomes something far more elusive.

The total lack of felt consequence that François experiences is perhaps the most surprising element. He seems to feel no remorse for his deeds, even after the death of his wife. In some ways he’s an incredibly simple man. Whatever makes him happy, he does. This also makes him an incredibly selfish man. He destroys his wife’s life, whether you think she kills herself or not. His concern for her happiness is so small that he just assumes that all she needs to be happy is that he’s happy.

Happiness in relationships is a complicated subject. For me, I can’t be truly happy unless the person I’m with is also happy. In fact, it’s often more important to me that they’re happy than that I am. To watch a film where the main character is so totally disconnected from the effect he has on those around him is so utterly alien. It’s a view of the world through the eyes of someone so self-absorbed that they can’t see the world they exist in. It’s hard to watch. I’m not sure I have any strong ideas on what Varda was saying with this film, but it’s definitely made me contemplate it. - Mar 29th, 2017