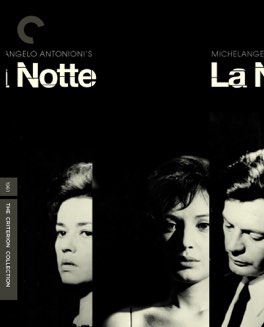 Another absolutely beautiful film, full of all those long and plaintive shots I love. Some directors speak to me, and Antonioni is definitely one of them.

I mentioned when writing about L’Avventura, the first in Antonioni’s informal “alienation” trilogy, that I found an answer to the ennui of that film’s protagonists in meaningful relationships. It seems somehow fitting then that this film, the second entry in the series, is all about what happens when those meaningful relationships go stale. It’s almost as though the film anticipated my response, and set to puncture any ideals I might use to avoid dealing with the harsher aspects of life.

This film depicts one day in the life of married couple Giovanni and Lidia. They are somewhat idly rich. Giovanni is an author of renown, who has just released a new book. Lidia comes from a wealthy family. They move through the upper crust of Milan society. As the story starts, they are visiting a friend who is dying in the hospital. From there the story follows them as they diverge, rejoin each other, and finally end up at a party where Giovanni is smitten by a young lady named Valentina.

The marriage between Giovanni and Lidia is in a serious state of decline. They were clearly deeply in love once, but the years have passed and they have grown apart from each other. By this point, they seem to be on the verge of total collapse. The only thing keeping them together is inertia, and even that is starting to strain. That Giovanni is comfortable openly approaching other women, almost with the tacit approval of his wife, says everything.

I still believe in the power of love and relationships. They’re just hard work. It’s so easy to decide that the love part of your life is solved, and thus allow yourself to direct all your intention to other areas. Often it’s our careers. It could be anything really. In order to keep a relationship alive, you have to be dedicating the same kind of time that it took to build it. Plants need water and light to live, and so do connections between people. - Feb 23rd, 2017