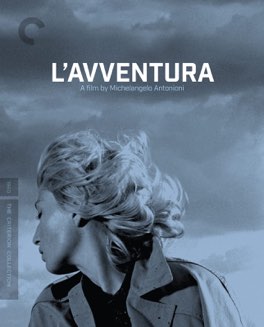 At least as beautiful as I expected it to be. Full of incredible long shots, and an impeccable sense of place. This is a slow film that uses slowness to great effect.

So much of cinema explores the nature of meaningful lives. The postwar alienation of this film is certainly no exception. In this case it’s about the difficulty of finding meaning in a world where traditional values seem obsoleted. If we don’t have the past to build on, what do we replace it with? It’s been almost sixty years since this film was released, and we’re still dealing with all of the issues it raises. If anything, they’re even more relevant now.

The film tells the story of Anna, her boyfriend Sandro, and her friend Claudia. They belong to the idly rich upper class of society, and it’s unclear if the women have jobs. As the story begins, Anna and Sandro are being reunited after some time apart, and all three are headed out on a pleasure cruise. As the cruise docks on an island for a swimming break Anna and Sandro fight, with Anna saying she wants even more time apart. Soon after she disappears. The rest of the film follows Sandro and Claudia’s attempts to find her, as well as dealing with their eventual attraction to each other.

Most of the characters are struggling with a lack of meaning in their lives. Anna is tired of her domineering dignitary father, and her domineering and uninvolved boyfriend. Sandro was an architect, but has since started working merely as a predictor of how long a building project will take. He’s feeling disconnected from creative art. Claudia is probably the most well adjusted, but she’s still longing for connection. Almost everyone we meet seems disappointed in the path their life has taken.

I also struggle with ennui. With the feeling that I’m not accomplishing enough, not improving myself enough. I don’t have a solution, but what I do is to look for meaning in my relationships. In the friendships and love I’ve built. In the film, the characters have mostly replaced real connection with pure sexuality. There’s nothing wrong with casual sexual relationships, but it’s a difficult way to build a life if you have nothing else. They are missing the meaning in real connections with other people. In a world that’s increasingly distant and ephemeral, real connection seems more important than ever. - Dec 5th, 2016