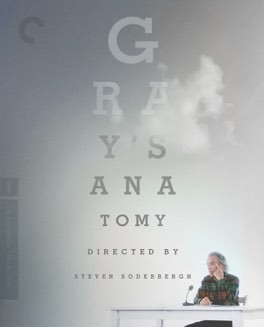 The second time is not the charm for me and Spaulding Gray. I’m just not a fan of his, and given that the entire film is simply him talking, I’m not a fan of the film either.

The film tells the story of Gray discovering he has an eye condition, being told surgery could leave him blind, and doing everything in his power to avoid having the surgery. Sprinkled in are quite a few divergences into only tangentially related incidents in his life, or the lives of people he intersected with. Apparently the film represents only a portion of the full monologue as Gray typically performed it. It’s hard for me to imagine this inane story being even longer, but I assume what was lost were even more semi-related moments along the way.

Similarly to And Everything is Going Fine, I was not captivated by Gray’s oratorical style, or the story he was trying to tell. There’s just something tiring, and ultimately boring, about listening to him talk. A great storyteller, or an orator of any kind, has variance in their speech. A great story rises, falls, pauses, slows down, speeds up. Gray has none of this in his delivery. Instead it’s all rapid fire, talking as fast as he can, with only the briefest of pauses to indicate he thinks he’s being funny. I’m sure this film is someone’s idea of a good time, it’s just not mine. - Dec 15th, 2017