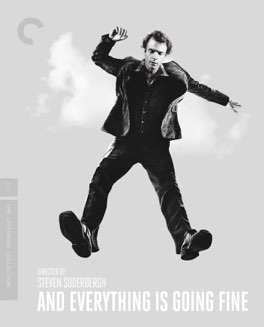 An interesting experiment and, ultimately, a very sad documentary that explores one man’s life through his work directly. The decision to essentially create a new monologue out of old clips is a good one.

And Everything is Going Fine

The only person talking for most of this documentary is its subject, the monologist Spalding Gray. I don’t think I’ve ever seen a documentary like this before, where no one is interviewed. It is, instead, a collection of clips from various monologues he did, various interviews he gave, and home movies. It’s an interesting way to tell a story and I think it works pretty well. Having said that, I’m not really sure how much I liked this film.

I had never heard of Spalding Gray before I saw this documentary. He was definitely an interesting guy. I’ve never seen someone so open and revealing and yet completely closed off from the world. He talks shockingly matter-of-factly about things in his life that most people would probably hide, and yet he apparently had many secrets and issues. Issues that, ultimately, led to his committing suicide. His mother committed suicide as well and he talks openly about thinking about it for years. It’s haunting to know how he died and to listen to him talking about suicide so brazenly.

Most of the footage isn’t of very good quality but it’s really unimportant. As a monologist his shows were bare anyway, there is rarely more of a “set” than a table, maybe a couple props, and Gray. His monologues are definitely interesting, and surprisingly funny, but also very sad. He seems like a very sad man really, with very little hope for the future. I suppose that makes sense, given what happened, but it’s hard to watch.

I found myself getting a bit bored watching this film but I’m not sure why. I’m in Iceland, and I’m fairly jet lagged, so that’s probably part of the problem. But even if I was at home I’m not sure I would love this film. It’s just kind of tiring to listen to this guy be sad. I think as a monologue it works very well, and I’m glad I watched it, but I don’t expect I’ll watch it again. - Mar 30th, 2014