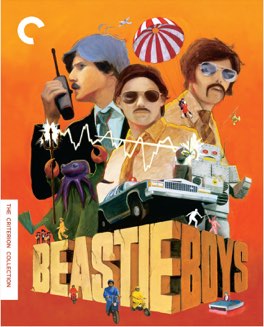 It’s so crazy to go back and watch all these videos. You really see how much ground they covered, how diverse of a group they really were.

As I’ve mentioned here before, I’m Jewish. I grew up in late-twentieth century America. I like Hip-Hop. I like Punk. It doesn’t take much of a stretch to imagine that I’d be a huge fan of the Beastie Boys, and indeed I am. It’s hard for me to explain how important it was, growing up in the time and place that I did, to have a group like them in my life. It’s not at all hyperbolic to say that they were a huge influence on my teenage years.

The 80s and 90s were interesting periods in the history of American Jewish cultural representation. Certainly, Jewish people have been heavily involved in the arts in this country. Hollywood and the music industry are hardly underrepresented. However, the Jewish participation was almost never about being Jewish. The people involved might have been Jewish, but the characters almost never were. The musicians themselves might have been ethnically, culturally, or even religiously Jewish, but it wasn’t really something they talked about.

To have a band like this one then, who were openly Jewish, was a huge deal. It was especially a big deal that they were rappers. I’ve mentioned before that I didn’t feel a lot of connection with the European cultural touchstones of my childhood. I was much more likely to watch African-American television shows, or listen to African-American music. So, to see a group who were part of this thing I loved, Hip-Hop, but were also Jewish, was absolutely incredible. It gave me something to connect with, and someone to look up to.

In addition, the Beastie Boys themselves were a huge part of my life. Because of them I learned about the tragic, and tragically still ongoing, occupation of Tibet. Because of them I got involved with activism in general. They opened my eyes to a wider world around me, and as a young vegetarian, made it cool to be what I was already passionate about. So to have this collection of videos, the only one like it in the Criterion stable, it means a lot to me. - Jan 10th, 2017