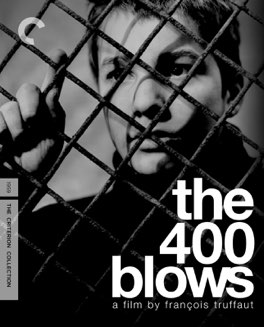 Sometimes things completely live up to the hype, and this was definitely one of those times. A masterpiece of cinema, marvelous in every way. I’m so excited to watch the rest of this story play out.

I never liked The Wonder Years. I just couldn’t relate to it. The way the child, Kevin, couldn’t talk to his parents. I would scream at the television, insisting he tell them what was going on. It just didn’t match up with my cultural heritage at all. I was a much bigger fan of The Cosby Show (a love tainted forever by the horrible actions of Bill Cosby), and The Fresh Prince of Bel-Air. Even though they weren’t about my culture specifically, they were so much closer and more recognizable to me, and therefore much more enjoyable.

I bring it up because I love this film, which begins the story of Antoine Doinel, as he deals with family and school life. Antoine is a lot closer to Kevin from The Wonder Years than to anyone from The Fresh Prince. The inherent unfairness of his situation is largely the same. His relationship with his parents is fraught and one directional. His society thinks the worst of him, and no one has his back. It’s exactly the kind of thing I would have hated as a child. I would have felt miserable watching him fail to assert himself.

As I grow older, I think I’ve come to appreciate the differences in the world around me. Seeing someone who doesn’t relate to his family exactly the way I do no longer triggers an angry response. Instead, I’m able to see the things I’m glad I didn’t have to go through. I really don’t think I would have faired well as a child of the French 1950s. My innate sense of self, and willingness to speak my mind, would not have been appreciated. I’d probably end up a lot like Antoine actually, cast out by my family for a rebellious nature, gone unsupported.

Perhaps that’s why I can relate so strongly with this film, even though I don’t feel much of a connection to the basic story. As Tolstoy wrote in Anna Karenina, “Happy families are all alike; every unhappy family is unhappy in its own way.” I had my own struggles as a child, and even though they were totally different ones than Antoine, I can still relate to the idea of struggle. I connect with this film in an orthogonal way, but it ends up being no less significant. It’s an interesting revelation. I’m curious to see how it affects my film watching going forward. - Nov 25th, 2016