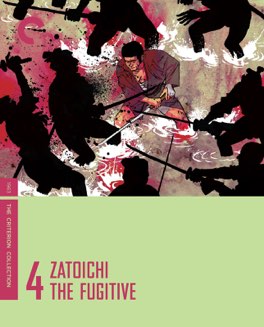 The first film in the series that feels like it can’t stand on its own. It’s still an entertaining yarn, but hardly anything special.

I’ve been debating with myself about the format for this site. My layout, with its single essay at a time, makes me feel like I’m underusing the design if I post short entries.

However, for some films I just don’t have that much to say. After lengthy consideration and a fair bit of consternation, I’ve decided that I’m ok with that.

The point of this site is for me to write something about each of the films I’m watching. If that’s a long essay that’s great. If it’s something shorter, an idea or two and a general feeling, that’s ok too.

I’m no longer going to bundle larger series into single posts, but rather just write what I feel like writing without so much concern. With that out of the way, onto the film.

My essay for the previous entry in this series, New Tale of Zatoichi, concluded with the comment “I can’t wait to watch the next one.” By that standard I have waited indeed, as that was over a year ago.

While it was worth the wait, I still enjoyed this film, this entry marks a definite turning point for the series. This is the first film that feels like a straight sequel, like they’ve figured out their basic structure and can start simply turning out new episodes in a near-endless parade.

It keeps all the basic beats of the previous films, the obscure and complicated plot, the light sequential nature of the story, and the vague compassion that I’ve praised so highly in my previous essays.

The vagueness of the compassion is the saddest change to the series. This film, which follows Ichi as he inadvertently gets involved in yet another internal Yakuza struggle, is perhaps the least humane of the films thus far.

Ichi kills a ton of people, and for the first time seems to kill based on his own anger, rather than purely out of self defense. He’s still a tragic character, and I’m still rooting for him, but there’s less perspective on life in this film than in the previous entries.

Ichi’s transformation into a superhero is now complete, and while I’m sadly somewhat underwhelmed, I’m still intrigued to see what happens next. - Aug 28th, 2016