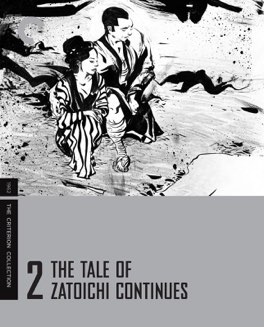 The Tale of Zatoichi Continues

The rare sequel that equals the accomplishments of the original, if not surpasses them. This is another excellent entry in what appears to be a phenomenal run of films.

As I said in my review of the first film in this series, The Tale of Zatoichi, this is a shockingly humane film.

It’s even more surprising here though, as it came out the same year as the first, in an obvious attempt to cash in on the unexpected popularity of the character. We have a new director this time out, Kazuo Mori, who also wrote the film, but the general feel remains basically the same.

If anything, this is an even more beautifully shot and paced film than the first one. Somewhat slower, and more deliberate, with a deeper connection to the character and what he’s going through. We’ve already been introduced to Zatoichi and now the story really begins to unfold.

It’s a wonderful follow-up to a film that I enjoyed a lot, and I’m really hoping that they’re all this good.

So, what is going on with Zatoichi since we saw him last? Well, it’s been a year since the previous film and he’s returned to the site of that adventure to pay his respects to the man he killed. Along the way, he is hired to massage a powerful lord who, unknown to anyone outside of his retainers, is completely insane.

Although Zatoichi has no intention of doing anything with this forbidden knowledge, they decide that he must be killed in order to perserve their secret. But, as we’ve learned by now, it’s a lot easier to attempt to kill Zatoichi, than to actually do it.

After the massage, Zatoichi retires to a local restaurant, where he learns from a group of Oiran, or prostitutes, that the town is being searched for him. One of the Oiran, Setsu, falls for Zatoichi, and he learns that she greatly resembles his long lost love Ochiyo. Another Samurai, Yoshiro, is also present, and also claims to have had a love for a woman named Ochiyo who left him.

Zatoichi spends the night with Setsu, who claims she would love to marry him, but he heads off the next day after being attacked by more of the lord’s men. Eventually Zatoichi wanders back to the grave of the man he killed, running into the boss he reluctantly fought for in the first film.

Things quickly come to a head between Zatoichi, Yoshiro, the lady from the first film Otane, and the various other people attempting to kill him. The film ends with one of the most beautiful shots I can remember seeing.

The plot is fairly straightforward Samurai genre fodder, much like in the first film. But, also like in the first film, the character of Zatoichi himself transcends the material and makes the story about something greater. In this case it’s about the pains of love, the regrets of the past, the burden of responsibility, and the inevitability of fate. Heady stuff, as I’m sure you’ll agree, but it’s all handled with serious aplomb, and in the flow of the film.

The first scenes that speak to this point are the time Zatoichi spends with the Oiran Setsu. He remarks to her that he can’t believe that any woman would want to be burdened with a blind man such as he, but she assures him that her father married a masseuse and so would she.

It’s an interesting trade of messages, with her completely ignoring the condition that he thinks would make him unappealing to her. There are some really beautiful moments of the two of them together, and it’s nice to see Zatoichi happy, if only for a little while. The second part that speaks to these issues is a scene where Zatoichi reminisces about the first film, his life up until now, and what he has to do going forward.

It’s definitely being used for exposition purposes, but it also does a nice job of framing what’s happening here.

As I said, I’ve been impressed by both entries so far in this series, for how well made they are and how refreshing the messages are. It’s fascinating to compare these films to a Western series of similar ilk, in my case the James Bond films, to see how different they are.

It should be mentioned that I’m probably in the top four or five Bond fans you’ll ever meet, I absolutely love that series, but it’s a bit light on the serious thought provoking. And that’s fine, not every film needs to challenge your mind, but it’s just so interesting to see a genre series that does.

These films so far, and I hope moving forward as well, have almost completely avoided the cliches that would have been so easy for a real character with real problems. The other advantage that this series has, over the Bond films, is that all the films star the transcendent Shintaro Katsu as Zatoichi. These films are thus able to have a much stronger sense of continuity of purpose than the Bond films, who have traded actors every few years as the character fails to measurably age.

Again, I love the Bond films, I’m just happy there’s a place for both types of storytelling in the wide world of cinema. And I’m really happy that I get to see it all. - Oct 22nd, 2014