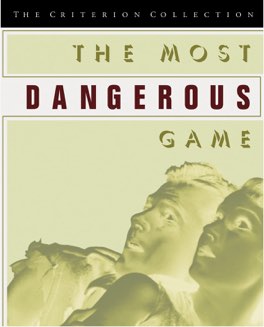 An incredibly entertaining film, one that still holds up today. It’s a phenomenal example of the golden age of classic Hollywood horror.

The Most Dangerous Game

I’m participating in another blogathon, something that always fills me with joy. This time I’m writing for The Great Villain Blogathon hosted by Speakeasy, Silver Screenings, and Shadows and Satin. The theme is delightfully simple, to write about any film villain, from any era, country, or genre. As I said in my thoughts on The Uninvited, I have a love of early Hollywood horror, so I was immediately drawn to writing about this one, one of the true classics of that period. As I explored it further, I found that the film was quite a bit more contemporary in its attitudes than I imagined it would be.

As is the case with so many films from the distance reaches of cinema past, I already knew quite a bit about the story before I started to watch it. After all, It’s been parodied and referenced by everyone from Gilligan’s Island to The Simpsons. The film begins with big game hunter Bob Rainsford, shortly before he’s shipwrecked on a small jungle island. He quickly finds the only house, owned by the Russian Count Zaroff, a fellow hunting enthusiast who claims to have found a new “most dangerous” prey. Something is immediately very suspicious about the Count, however, as his other guests continually disappear after going hunting with him. Eventually Bob and the last remaining guest, Eve Trowbridge, discover that Count Zaroff is hunting people. The rest of the film follows the inevitable hunt of Bob and Eve by the Count.

This film is remarkable for its progressive attitudes towards the nature of hunting. The story begins with Bob, someone who is famous for his writing about the joys of hunting, defending his belief in his “sport”. He’s a hunter, one who thinks that man killing animals is the natural power structure of the world. In flipping that dynamic, literally turning the hunter into the hunted, the character of Bob, and through him the audience, is forced to confront how destructive that is. The film presents hunting as ultimately a negative act, a viewpoint that I don’t think was a widespread at the time it was released. By making the evil character the one most supportive of the idea of hunting in general, it demonizes the concept. The film, therefore, presents a surprisingly humane perspective.

Ultimately, the villainy of Count Zaroff isn’t in having completely evil ideas or desires, but rather in his representation of a logical extreme. Zaroff is hunting people because he’s too good at hunting animals. He’s learned every trick, mastered every technique, and he’s bored. It’s not that great of a stretch for him to want to find a new prey. This lack of evil purpose, he’s legitimately shocked that a fellow hunter like Bob doesn’t respect what he’s doing, is more terrifying than any crazed killer could be. He’s Bob, but with a few principles lost along the way. And if he’s Bob, who is presented as something of an everyman, than he is us as well. Any one of us could become Count Zaroff if we let our desires run ahead of our humanity.

This uncomfortableness with the lack of distance between us and the Count is only expanded in his treatment of Eve. The Count explains that he believes women can only be pursued in the aftermath of a successful hunt. The film is somewhat delicate about this, but what the Count is saying, is that after he hunts and kills Bob, he’s going to come back and rape Eve. He says it all so matter-of-factly, and with such lack of an expectation of disagreement, that it’s still shocking today. He’s not really trying to threaten Eve, or Bob for that matter, he’s simply stating what he feels is obvious. Similarly to the hunting, this represents an attitude close to that of the hero at the start of the film, which means we’re forced to examine it as part of our defense of Bob. Zaroff is simply Bob let out of his own internal morality. It’s a wonderful way to make a point about the nature of evil, and it still holds up remarkably well today. - May 18th, 2016