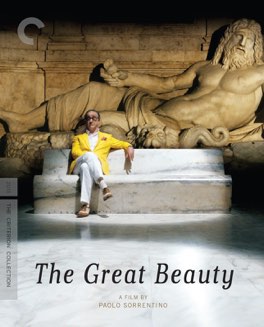 A captivating and stunning love letter to Rome. The energy and emotion the film showed for its setting was almost more important than its narrative.

I imagine that anyone with a propensity for sarcastic wit has struggled with the same tendency I have to fall into darkly humorous critique. To be the person at a party who snarkily mocks the world around them, to the nervous laughter of those around me afraid they might be next. To judge everyone, including myself, and find us all equally and horribly lacking. It’s not a particularly positive way to live, and it’s a side of myself I’ve flirted with for as long as I can remember.

This film follows someone with a similar nature, but who has long ago lost the struggle, and given in to his demons. That someone is Jep Gambardella, who wrote a hugely popular novel in his twenties, and who has spend the last forty years coasting on his one notable accomplishment. He functions as the maker and breaker of high society Roman life, the king of the scene. The film takes place in the days after his 65th birthday, as he begins to reconsider what his life has been about. We see him go about his routine; he stays up late attending a never ending series of social engagements, and in the early morning hours he wanders the streets of Rome. We also see him briefly find actual connection with another human being, only to see it somewhat tragically cut short.

Watching Jep was like looking into a mirror at what my life might have been. I also once found my niche in a social scene as the funny and sarcastic asshole that reminds everyone of their bullshit. The film was especially affecting because Jep represents not my past, not where I was when I was living that life, but where I might have ended up if I had stayed on that path. At some point I got out, and watching this film reminded me that I’ve never felt much regret for that. Being some kind of low-rent Oscar Wilde is fun for a while, but ultimately you spend most of your time interacting with people that you honestly don’t really like very much.

I do have one bit of jealousy for Jep’s life though. His love, and the film’s love, for the city of Rome, is overwhelming. His cynicism and detachment fade away as he wanders the streets of the city. In some ways he’s the embodiment of the place. He’s loud, cultured, crude, living history, judgmental of anything new, wildly embracing life while remaining consciously detached. He’s happily lost, and yet someone who is dying to be found, all at the same time. It’s a beautiful thing to love a place like that. I’ve felt it before, and I hope to find it again someday. When I do, I’m happy that I’ll be sharing it with people who matter to me. - Oct 8th, 2016