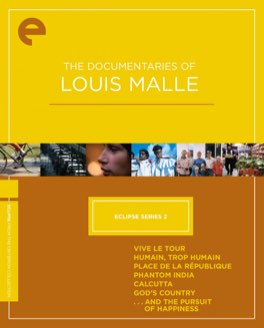 What an incredible set this is, full of fascinating views into times and places long gone. Phantom India is the jewel, and one that I’ll watch many more times, but I enjoyed all of these immensely.

The Documentaries of Louis Malle

Louis Malle was a French New Wave director who won the Palme d’Or, the Academy Award, and the Golden Lion. Eventually he emigrated to the United States and made, among many other films, My Dinner with Andre, one of my all time favorites. In addition to his incredible work in narrative filmmaking, he also made a series of documentaries which are equally inspired. This set has all but one of those documentaries, and it represents an incredibly diverse choice of subjects. Always with the same eye towards revealing personal truths and ideas. Showing us Malle’s France, India, and even the United States, these films are all at once engaging, confronting, charming, and heartbreaking.

This is a delightful look at a sport I don’t know much about, bicycle racing. I’ve been fascinated by the Tour de France for a long time, and this short does a wonderful job showing various aspects of the process. Malle focuses on the little moments, without ignoring the larger narrative. Specifically, this short does a remarkable job of offering a ton of information as to how the Tour actually functions. I was especially shocked to see Malle pulling no punches in his examination of the issues of doping, and their effect on the sport. It’s somewhat disheartening to me to know this has been an issue in cycling since the 1960s. There’s a certain vibe around this film that I hope continues throughout the documentaries in this set.

I’ve been thinking about this film ever since I finished watching it. It’s the mostly silent story of an automotive plant. We see the thousands of people needed to make cars in the seventies, watching many of them as they go about their mostly unskilled labor. I was filled with so many different thoughts while watching these people working, most of whom looked to be about my age. For one thing I cringed repeatedly at the horrifically unergonomic jobs so many of these people were doing. It’s painful to watch now as they do the same menial tasks over and over again, destroying their bodies for so limited a life. More specifically though, I thought about how these jobs are all gone now. How we’ve replaced all of this with more automation, removing the need for so many of these people. I thought about how lucky I am I never worked in a factory, but also how hard it is for so many to find decent work. This film made me think all of these things. Not bad for a documentary that’s ostensibly about cars!

This is exactly the kind of time capsule documentary I just can’t get enough of. There’s something about watching ordinary people from a different time or place that’s absolutely fascinating, even if they have relatively little of real importance to say. For this film, Malle simply recorded whatever happened to be going on in the titular République square in Paris. He interacts with the people directly, and even works the fact they’re being filmed into the conversations. What comes from this is a wealth of odd information from the working class people of 1970s Paris. We get a lot of complaints about retirement and money, some thoughts on life and relationships, and many small moments that made me smile. Malle shows a wonderful interest in all the people he’s interacting with, which brings out the best in them, and also helps make them interesting to the viewer. It’s an incredibly valuable thing to have this kind of time capsule into the past.

I’m a huge fan of travel documentaries, something that should come as no big surprise to anyone who is familiar with my cinematic leanings. Something about seeing a place I’ve never been, or encountering people I’ve never met, is endlessly fascinating to me. I don’t think I’ve ever seen a travel documentary quite like this before though. Perhaps that’s partially because this is a really French documentary, like the kind of documentary I would assume the French would make, like the stereotype I might have of French documentary. On the other hand, it really is unique among the travel documentaries I’ve seen. For one thing, it’s extremely self-aware, constantly questioning its own role as a reflection of the perspectives of its author. For another, it’s extremely aware of its responsibility as a force of change, not simply as a passive recording. This is something I wish more documentaries would consider; when we film something we inherently become a part of it. It’s not possible to remain uninvolved in something we’re documenting.

The film also comes along at a helpful moment in history. The late 60s was an explosive time for thought around the world, and it’s so interesting to see Malle confront his thoughts about India. He is dealing with both his preconceptions of what he would encounter, and also with his changing and complicated feelings on what he has actually found. There’s a certain wistfulness, a feeling that he’s seeing things right before they change, and it leads to a powerful sense of purpose. Malle is simultaneously in awe of the in-the-moment nature of Indian life, but also fearful they too are descending into what he calls folklore, or the preference of nostalgia over reality. He’s incredibly aware of the pain of the economy he witnesses, while at the same time glorifying some of the effects of that poverty. It’s fascinating to follow along as his viewpoint inevitably shifts, as well as to his meta-commentary on his experiences while he was in India versus his thoughts on the footage once he returned to France.

It’s all this perspective that makes this film so great. All documentaries, like all films, have a point of view. This film is just so wonderfully open to that fact, making no attempt whatsoever to try and hide behind some absurd notion of objectivity. This isn’t India, it’s Louis Malle’s India, the India he experienced. We are treated to his thoughts on what he experienced. Rather than simply framing the narrative by what he chose to edit, he does it explicitly with his word and ideas. I found that to be so worthwhile. Malle has a lot of value to add to what he chose to film, and his narration takes this film from good to great. There’s no distance here between the film, and the people and places it’s about.

I especially enjoyed Malle’s focus on the lives of both the average Indian, and those in extremely small subgroups. His portrayal of the real people of India, as opposed to a kind of progress propaganda film, got him in trouble with Indian expats, as well as with the Indian government. They felt Malle had focused too strongly on the the economic poverty of India, and not enough on their capitalist successes. For me that’s missing the point of the film. Malle wasn’t focusing on either of those things. Instead, the film is full of what he found in everyday people, and in their traditional ways of life. Certainly he comments on their extreme economic hardship, but mainly as a counterpoint to their continued devotion to traditional behavior, as well as a predictor that those traditions would soon be dying out, to live on only as nostalgia. It all makes for a much more valuable document, to see this moment when history was living, than any focus on supposed progress could have ever provided. This is an incredible film, and I’m so happy I got to see it.

This film is much narrower in scope than the previous one, which isn’t a surprise given that it focuses on one city instead of the entire country. During the editing process for Phantom India, Malle realized he had enough footage from Calcutta to devote an entire separate documentary to it, and that’s what we have here. It’s much darker in tone than its predecessor. There’s almost none of the lighthearted attitude, and almost none of the contemplation of the role of the documentarian in how life is presented. Instead we get a focused piece on the misery Malle found in the capital city of Bengal. The film shows the vast disparity between the lives of the tiny rich upper class and the vast majority of the city, who lived in slums, and were barely scraping by. He shows the lepers, and the untouchables, the garbage heaps, and the impossible economics. It’s a much less fun film to watch, but just as relevant. I can’t say I exactly enjoyed watching this film, but I’m still incredibly happy I got to see it.

This film, which explores small town Minnesota, is about as huge a jump from the previous one as I can imagine. At least it’s a huge jump for me. I’d imagine it wasn’t quite as dramatic for Malle, who went from the foreignness of India to the foreignness of the American Midwest. I enjoyed this film, but only barely. It’s just filled with too many reminders of the bigotry of so much of this country. What I was able to enjoy was mostly how much Malle seemed to be enjoying himself. It’s hard to tell if this is in some ways tongue-in-cheek, but ultimately I don’t think so. He’s too consistent with his expression of joy in the simple people he meets for me to think it’s all some grand joke. But still, I’m not 100% sure. The bulk of the footage in this film is from 1979, but because it took PBS six years to edit the film, we get Malle returning in 1985 to see what’s changed. The disparity is striking, and the commentary on Reagan’s America is fascinating. Ultimately I’m glad I watched this, even if it was a bit difficult to get through.

What a wonderful way to end this series, and what an incredibly appropriate film to be watching right now. This look at immigration to the United States of the mid-80s is eyeopening. It’s a much gentler time, full of optimism and hope. There’s a scene early in the film where a Cambodian family fleeing the Khmer Rouge is being processed by immigration at JFK airport in New York. The customs officer is so welcoming and helpful, even while doing his job. I find it hard to imagine a similar scene is happening today, but I certainly hope I’m wrong. At any rate, it’s powerful to see this exploration of all the various sides of immigration in this country, from legal to illegal, refugee to former dictators. It was heartwarming and, at times, frustrating, to look back to a simpler period in this nation’s dialog with itself about our heritage as a melting pot, open to the world. As I’ve said a lot lately, I think it’s absolutely critical that we continue to be a place people want to, and can, come. In our best moments it’s one of the defining positives of our culture. - Jul 29th, 2016