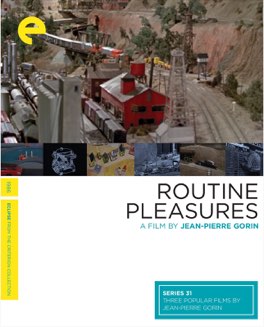 A fascinating look at the psychology of hobbies, as well as a man making a film about a hobby. This is about as meta and grounded a film as I can remember occupying the same temporal space.

This film has a lot going on. On the one hand, it’s about a group of men who have been coming together to operate a giant model train set every Tuesday night for twenty-four years. On the other hand it’s about director Jean-Pierre Gorin’s relationship with his friend, the film critic and painter Manny Farber. Finally, on some metaphysical third hand, it’s a film examining the nature of hobbies, and the pleasures one can find in doing things that would be mundane to most, and which are almost indistinguishable from work.

For whatever reason, I sometimes really enjoy repetitive and mindless tasks. There’s something extremely relaxing in doing something over and over again, to the point that it becomes second nature, and thus completely ignorable. It allows my mind to wander to nowhere, and my body to keep itself distracted with something to do. When I was a teenager, I used to buy a record or CD at a store, come home, put it on in my parents living room, and sit down to play Super Mario Bros. 3 for the Nintendo. It was a game I’d played a million times at that point, and I could play it so thoughtlessly that it allowed me to fully drift into the music. I guess what I’m trying to say is, I think I understand these people.

Of course there’s the other side of their hobby, which is their utter and total obsession with trains. As someone who is currently attempting to watch something like a thousand films and write about them, as well as purchasing all the films on doomed physical media, I understand them here as well. A really great hobby should be one that has sufficient depth. It’s easy to learn everything about some things, in a short amount of time, and then move on. To be really worth investing there should be an almost endless list of avenues to pursue, and additional facets of the hobby to get excited about. Film is like that, and apparently so are trains and model trains. This film filled me with the comfort of kindred spirits. - Sep 8th, 2016