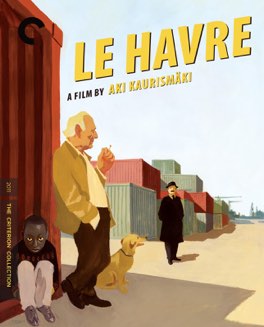 A perfect expression of belief in the better angels of our nature. It left me feeling wistful for a time that never was.

Longtime readers of this site might remember that I have a particularly strong connection to the plight of immigrants and refugees.

As I’ve mentioned before, my great-grandparents were denied entry into the United States during WWII due to quotas, and died in a concentration camp as a direct result. I’m only alive at all because my grandmother and grandfather were able to get to this country, at great personal risk.

As a result of all of this history, I feel extremely strongly that we must do everything we can for refugees, but also for anyone who is leaving their home in search of a future. It should come as no great surprise, therefore, that this film spoke to me.

The film follows the stories of Marcel Marx, a simple shoeshiner whose wife has recently gone to the hospital with cancer, and Idrissa, a young illegal immigrant from Gabon that Marcel decides on a whim to help.

As the film opens, Idrissa escapes from the police after they discover him in a shipping container that was bound for London, but has been accidentally misplaced in Le Havre.

Marcel happens to stumble upon him shortly thereafter and decides to help the boy reach his mother. The film follows Marcel as he goes around attempting to figure out how best to get Idrissa to London, all while evading the attention of a police investigator who is tasked with finding the boy.

This film presents the world not as it is, but as we wish it could be. Marcel has absolutely no reason to help Idrissa, a boy he doesn’t know, and one who brings him to the attention of the police. Marcel’s neighbors, almost all of whom immediately chip in to help in any way they can, have very little to gain and quite a lot to lose. And yet they all help, seemingly without pausing to think twice about the potential consequences.

This is a similar world to ours, with all of our laws, but full of kindhearted people who simply do the right thing when it matters. Virtually everyone in this story makes the altruistic choice at every turn, something that is sorely lacking in the real world.

This is a sort of fairy tale then, with a vision of reality bent in a very sweet direction. This year has been an incredibly tough one for world events. The news seems filled with nothing but death and destruction, and things seem very likely to get worse before they get better.

There are very real refugee crises happening all around the world, most notably in Syria. In this real world, it feels like all I read about are people behaving shamefully over refugees entering their countries. It reminds me in a terrifying way of my family and our history.

With every story of people being denied entry, or being treated poorly, all I can see are the faces of my great-grandparents, and how they died senselessly because of racist hateful people.

In this world of bad news and horrors, this film is like a breath of unbelievably sweet air. A world that’s the same as ours, only so much better, to remind us people are making a choice. That they could always choose to care instead, to act with humanity.

There’s so much media that makes me angry, or sad, or scared, it was really nice to watch something that made me smile. This film was a delightful pause before I have to face even more of the same terrible news.

It was heartbreaking in a sense, to see something so wonderful, only to come back to the broken world we actually live in. All I can do is try to bring as much of this better world into my own as I can, and hope that enough others will do the same. - Jul 15th, 2016