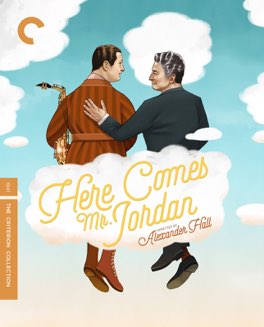 A fun and lighthearted film that doesn’t take itself too seriously. I enjoyed this one quite a bit.

I think about destiny, predetermination, and fate a lot. Perhaps it’s because one of the very few things I really fear is regret. When I was a child, I was paralyzed by this fear, even for tiny and insignificant choices. As I’ve gotten older, I’ve gotten much more cavalier with most decisions in my life, but I can still get caught up when making really life altering plans. This film, which is really not much more than an enjoyable trifle, was therefore far more meaningful to me than it otherwise might have been.

The film follows the story of boxer Joe Pendleton, on the eve of his big chance at a heavyweight title. Pendleton likes to fly his own single person plane everywhere he travels, and on his way to training in New York he has a crash. When he comes to, he finds himself in something like purgatory, and is promptly informed that he’s now dead. After protesting his fate loudly, he finds out there’s been a mistake, and he was supposed to survive the crash after all. The angel responsible for making the mistake tries to take him back to his body, to fix things, but in the intervening time it’s been cremated. As a result Pendleton starts hopping between the bodies of recently deceased people, as the angels in charge try to help him recapture his destiny.

The film talks about destiny a lot. The titular Mr. Jordan, who is the boss of the section of angels dealing with this case, mentions multiple times that if Pendleton is meant to end up boxing champ he will be. There’s a strong vein of predetermination to the whole thing, as the film presents the idea strongly that things are decided in advance, and we’re just bumbling towards them. This is a bit of a comforting idea, if even it’s not particularly helpful. It’s comforting, because it would mean I’ll end up where I end up, no matter what dumb things I choose to do in the meantime. It’s not particularly helpful because it’s not going to stop me from doing all those dumb things along the way.

I’ve mentioned before that it’s sometimes hard for me to watch hardheaded men from this period on film. When a character acts like Clark Gable in It Happened One Night I’m usually put off by their offensive and retrograde lack of regard for the people around them. When I initially sat down to watch this film, I assumed it would be more of that same spirit. Robert Montgomery has a very similar vibe to Clark Gable for me, at least in that respect, and so I was wary. This film, however, turns out to be an interesting subversion of that theme. Montgomery is overbearing and quick to judge, but in a really endearing way, one he uses to genuinely care about the people around him.

Instead of being put off by the bold nature of Pendleton then, I found myself oddly wistful for it. Even in regards to the central love interest of this story, Pendleton is remarkably sweet and undomineering. He knows what he wants, but in a decisively nonaggressive way. There’s even something weirdly endearing about a man so dedicated to his goals death isn’t going to slow him down. He’s like the antithesis of my moments of doubt, as he seemingly never allows a stray thought to creep for more than a few brief moments, and always lets it go as new information comes into his possession. There’s a lesson for my future there, and I’m going to keep thinking about it until I figure out how to use it in my own life. - Jul 5th, 2016