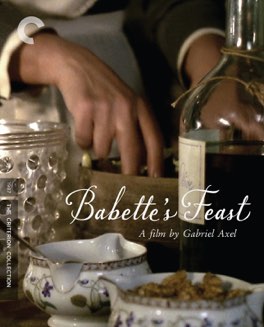 I don’t remember the last time I saw a film this life affirming. When it was over I found myself in a state of subtly persistent joy.

It’s incredibly impressive when a film is able to hold the audience’s attention without requiring action. The most obvious example of this, and my favorite as well, is My Dinner with Andre. That a film can be as engrossing and engaging as that one, when it’s about two people enjoying a long and unbroken conversation at a restaurant table, is a testament to its overwhelming brilliance. This film performs a similarly incredible feat, by making the final act so incredibly moving, even as all we’re watching is a group of comically stuffy people enjoying a homemade meal together.

The film follows the lives of two sisters, the only children of a 19th-century Danish Pietistic conventicle pastor. The film follows their early twenties, living under their father’s watchful eye. Both daughters are approached by eligible suitors, but each eventually gently turns them down. Sometime after their father has died, after they themselves have grown old, and as they are taking care of his remaining followers, they are introduced to the eponymous Babette, a French woman fleeing yet another revolution in her home country. She becomes their housekeeper and cook, in exchange for a safe place to live. On the hundredth anniversary of the birth of their father she decides to thank them for their hospitality by preparing a seven-course French dinner.

I have a great deal of trouble expressing my love for the people who matter the most to me. I was raised in a family full of emotional detachment, and we don’t show our feelings much. Instead of verbalizing my feelings I tend to try and demonstrate them with actions instead. Much like Babette in this film, I try to instill the things I do, with the feelings I have, for the people I’m doing it for. This often doesn’t translate to the intended recipient, many of whom find themselves unsure of how I really feel. Maybe because of my own struggles, I was completely caught up in what Babette does with the dinner. The effect her love has, transmuting food into pure joy, overwhelmed me. I was moved by it and it made me long for the ability to do the same.

One of my favorite philosophers is Kahlil Gibran, and the first book I read by him was predictably the one he’s most well known for, The Prophet. It’s a beautifully lyrical work, expressing its ideas in some of the most wonderful poetry I’ve ever encountered. The book is structured as a series of small lectures, given by a foreigner, to villagers he has spent time a long time observing. Each lecture is on a specific topic of life, and tries to explain Gibran’s theories on how we should live it. In the section on work he says “And what is it to work with love? ... It is to sow seeds with tenderness and reap the harvest with joy, even as if your beloved were to eat the fruit. ... Work is love made visible.”

Babette loves these people, who have taken her in and shown her kindness for so many years. She loves them, and she loves the French food of her homeland. In combining these things she makes her love visible. She imbues the food she prepares with all her feelings of love and gratitude, and they are so strong that the people she serves the meal to are physically and emotionally moved. What an incredibly wonderful idea. I need to learn to better express myself and my feelings, but in the meantime I’m going to keep trying to put all of those feelings into the things I do for the people I care about. This film is an inspiration to me, what more can I say than that? - Mar 16th, 2016