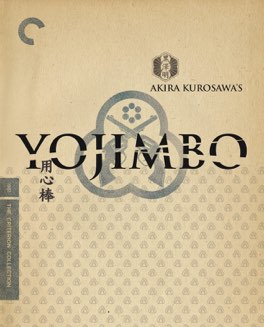 A wonderfully entertaining film that didn’t try to convey any deeper meaning. This was an almost purely genre exercise, and an incredibly impressive one at that.

I’ve wanted to see this film for a long, long time. My father is a fan of the spaghetti western films of Sergio Leone, specifically the Man with No Name Trilogy. I’d always heard that the first film in that trilogy, A Fistful of Dollars, was, shall we say, heavily inspired by this one. After watching this film I can confirm that that’s absolutely true. It’s not a shot-for-shot remake or anything, but there are a ton of very obvious similarities in plot and style between the two films.

What I find sort of wonderful about that, is that the director of this film, Akira Kurosawa, was himself inspired by the westerns of John Ford that he grew up enjoying. The history of world culture and media is full of these kinds of circular references, a point that Kirby Ferguson makes wonderfully in his video series Everything is a Remix. All works of art are reacting to the work that their creators had previously experienced, and the future always builds on the past. This kind of cultural transmogrification, where cowboys become samurai and then go back to being cowboys again, is amazingly representative of the way that the process works.

A part from all that cultural remixing, this is also just a really great film. I think what surprised me the most about it was how funny and lighthearted it was. Violence is used here, not to be intense or scary, but rather almost as comic relief. The brilliant Toshiro Mifune is his usual impeccable self as the no-named traveling Ronin hero of the film. He brings so much joy to the character. It’s also a beautifully shot film, full of the kind of long drawn out shots you’d expect from a Ford style western. Additionally, and this is something Leone gets right with his version as well, the music is absolutely wonderful. It’s so randomly sixties swing, and it’s incredibly weirdly appropriate. I really, really enjoyed the film.

I didn’t find a ton to analyze, it’s just shockingly well done. It’s Kurosawa writing a love letter to the western films of his youth, translated for his own cultural archetypes. The one thing I did find super interesting though, was that the most callous and devious of the bad guys is the the only person in the film to use a gun. This is a samurai film, everyone else uses a sword, but this man without honor uses a gun instead. It’s a fascinating mini-commentary on the nature of honor and tradition. Of course, it’s also possible that it was done purely to be more dramatic, but I found it to be a rather poignant commentary on the unrelenting march of technology, and the loss of traditional mores.

I was also surprised that this was a Kurosawa film. Certainly it had his usual stylistic touches and attention to detail, but it lacked the examination of humanity I’ve come to expect from his films. In Ran, or Rashomon for example, he’s investigating the nature of truth and personal relationships, even when reveling in spectacle. Those films are full of complex and compelling characters, while the characters here are almost cardboard cutouts. The main figure in this story doesn’t even have a name, and really no relevant back story or motivations. The most real person in the whole film is probably the grumpy restaurant owner who begrudgingly takes care of him. This is a film of exaggeration, and silliness. Perhaps I’ll find far more Kurosawa like this, after all I’m only really beginning my journey into his work. For now, this might not have the weight of those other films, but it was an immense amount of fun. - Apr 8th, 2015