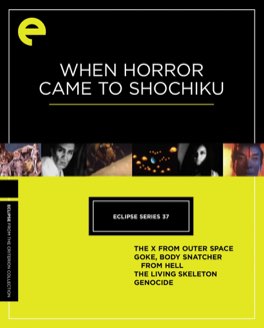 An experiment in genre film making that ultimately didn’t really pay off for the studio that attempted it. These aren’t great works of art, but they’re all entertaining, and I definitely enjoyed getting to experience them.

When Horror Came to Shochiku

By 1967, venerable Japanese film studio Shochiku had a problem. Their cash cow Yasujirō Ozu was dead, and the market had left their “family dramas” a bit behind at the box office. The massive success of Ishiro Honda’s Godzilla, as well as Nobuo Nakagawa’s Jigoku, convinced Shochiku bosses that they needed to try something a little bit different. What followed was two years, and four films, that were unlike anything the studio had ever done before. This set collects those films, and provides a fascinating glimpse into a brief moment in Shochiku’s long history.

When Shochiku decided to try their hand at genre film making, they started with this attempt at standard Kaiju fare, with an eye towards Godzilla. It’s an absurdly hilarious and silly film, with a threadbare plot that barely manages to hang together. I’m not sure a giant chicken was really the best monster they could have used to get the attention of Godzilla lovers. On top of that, the film has almost none of the metaphor or message of Godzilla, with its nuclear war allusions. Still, I found this film utterly entertaining, and full of a charm that only such a brazenly failed attempt could garner. The special effects are the height of schlock, but the model work is so lovingly detailed, even while it’s unbelievably obvious. The acting and dialogue aren’t particularly stirring either, but they really don’t need to be to get the job done. This film exists so that we can all watch a giant chicken overrun Japan, and I’m really OK with that.

Well now, that took a turn for the serious very quickly. What a different tone this film has compared to the previous one. Somehow it manages to be even crazier, with almost none of the cheesiness. Instead, it directs its attentions to more straightforward horror. This is a film about a serial killer, alien invasions, Armageddon, and the nature of human evil. It’s a much more interesting film, full of odd touches and creepily successful low-budget special effects. It doesn’t hurt that the actor playing the main bad guy is seriously creepy already, which adds a ton to the production value. This a much more competently made film, with a much more cohesive narrative, that flows and resolves in unexpectedly interesting ways. And yet, I’ll admit that I enjoyed the previous film more. For all its professionalism, this film just wasn’t as entertaining. One thing I found extremely interesting though, both films mentioned the atomic bomb. I would love to know more about cultural meanings that had in sixties Japan.

This film continues the trend of expanding quality and sincerity from the previous entry. This is a hugely atmospheric film, and it’s absolutely beautifully shot. It’s the only film in the set that’s in Black and White, and it uses the added contrast to wonderful effect. We get lots of long slow shadowy takes, and, as the story takes place by the ocean, lots of fog filled scenes as well. This is a classic revenge film, masquerading as a ghost story; it reminded me a lot of an old favorite of mine, The Abominable Dr. Phibes, which was made a few years later. The plot doesn’t completely hang together, but it makes up for it in sheer style and attitude. We get a lot of the same low budget horror as the rest of this set, particularly some truly cheesy bats, but it doesn’t make any difference because the film is just so much fun. Kikko Matsuoka is probably my main reason for liking this as much as I did, she just plays the role of lost and haunted sister so incredibly well. This isn’t a great film certainly, but I found myself really enjoying the ridiculousness, and getting swept up in the absurdity of it all.

This was the most visually impressive film in the set, at least in terms of special effects. It’s the only film in the set that never took me out of the story with its cheesiness, but it was also the least exciting. This is an environmental horror film, examining what would happen if the insect world turned against us and attempted the eponymous Genocide of mankind. This film also used atomic bombs as a plot device, but here it was directly tied to the USA, and much more central to the story. I found the anti-cold-war subplot of the film to be the most interesting thing it had to offer, especially as a part of a larger perspective on American military presence. The film openly mentions atrocities in Vietnam, as well as featuring an American soldier who has become a drug addict due to his experiences in the army. I’ve rarely gotten to see a foreign film which portrays the Americans as the bad guys as brazenly as this does, and it was fascinating to watch that play out. Still, this wasn’t my favorite in the series, it was a bit too slow and simplistic for that. - Apr 22nd, 2015