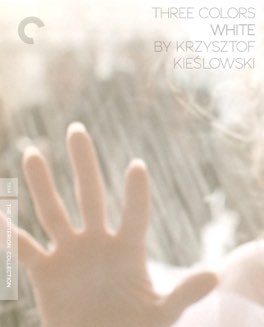 A much lighter film in tone than its predecessor, and not nearly as monumental. Still, I really liked this one, and I got a lot out of the ideas it presented.

Blue was a film about a certain kind of personal liberty, and it’s opposition to love and connection. This is a film about a kind of equality, an equality which is only possible through inequality. This film is often described as an anti-comedy, and I think I understand what people mean when they say that. They mean it’s a comedy of tragedy. Certainly it’s funny, although not really in a laugh out loud kind of way. I would describe it more as charming, and it’s full of moments that made me smile. Its central character has a wry humor, and the film builds a certain kind of insanity around the various plot elements, but the central themes that it presents are also very serious in nature.

The film follows Karol Karol, which is a wonderful name for a character, as he deals with his divorce from his wife Dominique, the legal proceedings for which open the film. In this first scene we get a minor crossover with Blue, as the French courtroom Julie tries to wander into in the first film turns out to be this one. Karol’s wife is divorcing him because she says she no longer loves him, but her legal reason is because they never consummated their marriage. Karol freely admits this, explaining that they made love often before the wedding, but that he’s been unable to perform since. He doesn’t speak French, but tries to assert in his native Polish that he still loves his wife and wants more time to reconcile. Shortly thereafter Dominique gets rid of him by framing him for burning down her hair salon, he flees back to his native Poland hidden in a suitcase, and slowly begins to put his life back together.

As the film starts, Karol is unequal to his wife in almost every conceivable way. He’s in France, where he doesn’t speak the language, and he’s lost his passport. He’s just been divorced. His money has become unavailable to him and his bank card has been repossessed. Finally, he’s wanted by the police for a crime he didn’t commit. By the end of the film, his ex-wife is in almost the exact same situation. And it’s in this change of circumstances that the film presents equality. This is what I mean by equality through inequality. Although Karol is in a much better place than Dominique by the end of the film, in another sense they’re now completely equal. They have put each other through the same harrowing experiences, and they’ve come out the other side in love.

It’s an equality, but it’s a horrible equality. Dominique is in jail, Karol is legally dead. They’ve done terrible things to each other. This is a similar approach to the way Blue dealt with liberty; presenting a dark side to these basic French principles of revolution. Blue contends that liberty is opposed to love. This film contends that equality is opposed to happiness. Karol and Dominique may be equals now, but no one ends this film happy. Dominique is in jail, and Karol has put her there, even though he so clearly still loves her. Karol is free, and while his wife loves him once more, they can only be together from a distance. It’s a very complicated perspective on equality, a completely different one than I think most people imagine when they hear the word.

I liked this film slightly less than Blue, but I think it made me think more. Blue was a much more serious affair, with a truly transcendent performance from its lead actor Juliette Binoche. This film didn’t have anything like that, nor did it have the same level of obvious reflection that Blue did. But, the idea being presented, that of an equality that’s only possible in a temporal scale balancing sort of way, is an even more potent one for me. The film presents this concept so enjoyably, but it’s also subtle and difficult, and I really had to work to wrap my head around what the ideas meant. I might have liked Blue more, but I’ll almost certainly watch this one far more frequently. - Aug 19th, 2015