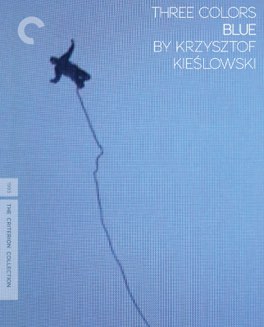 A powerfully affecting film; one that had me thinking about the concepts presented long after it ended. This was also a beautiful film, full of some of the most interesting camera sequences I’ve seen in a long time.

When director Krzysztof Kieślowski first conceived of this trilogy of films, he intended to title each one with one of the colors of the French flag. He was also under the impression that those colors matched up with the three elements of the French revolutionary motto; liberté, égalité, fraternité. As it turns out, he was wrong about the color to concept connotations, but it ends up not mattering at all. What does matter, is that this is, in some sense, a film about liberty. It’s also definitely a film about blue, the color scheme is used almost exclusively throughout, and it’s a masterpiece.

The film focuses on Julie, who is trying to pick up the pieces of her life after her husband and daughter are killed in a car crash that she survives. Her husband was a famous French composer, and a lot of the film focuses on an unfinished piece of music he was working on, as well as the question as to whether Julie herself was actually responsible for much of the work. For her part, Julie seems to want to have nothing to do with the music, or anything else really. She sells pretty much everything she owns, avoids all the people she previously knew, and moves into an apartment by herself, intending on living a new and solitary life. She spends most of the film attempting to forget her previous life, while simultaneously being continually forced into being a part of it, and a part of the world around her.

Liberty is an interesting concept. Traditionally, I think it’s used to talk about high minded ideals around freedom from slavery, or oppression, but this film takes a much more personal look at the idea. Here liberty seems to mean the freedom to be disconnected from those around you, to do what you want without considering the needs of others. A lot of Julie’s liberty comes from the sudden end to her responsibilities as a wife and mother. No longer tied to her family unit, she can, in a sense, do anything. There’s also an economic component to that freedom, her husband was a famous composer, so she has the money in order to be free from the demands of a job, or any need to provide for herself. She’s ended up in the perfect position to live a life of no commitments.

This kind of liberty can have a significant draw on ones mind, the idea of leaving it all behind and just doing whatever it is you want to do. But, I think the film does an excellent job of showing the psychic cost to that choice. In order to truly be liberated, Julie has to abandon everyone, and everything, that she loves. Love is presented here as the opposite of this kind of personal liberty. When you love friends, or relatives, or significant others, you are losing some of your liberty to their wants and needs. Julie can only keep her liberty if she maintains a complete separation from everyone around her, something the films suggests is neither ideal, nor, ultimately, all that possible.

Julie attempts for most of the film to avoid all responsibility, but she never totally succeeds. That’s because she remains a morally average human being. Sometimes the responsibilities are triggered by big events, revelations about her husband, or his unfinished work. But other times it’s for very small reasons. She sort of accidentally befriends a neighbor, again by simply not being terrible, and ends up needing to go and help that woman at her job. Which she does. Even such a small level of interaction reduces her personal liberty. She suddenly can’t maintain the absolute freedom of disconnection, because, as it turns out, she wants and needs other people in her life, just as we all do. The film is suggesting, that personal liberty is opposed to love and connection. That ultimately, this kind of liberty isn’t sustainable, or even very desirable. - Aug 15th, 2015