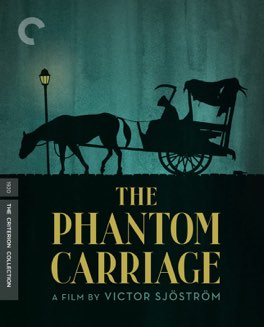 A truly magnificent and beautiful film. It’s so well crafted, and conveyed such an impressive mixture of feelings. This one will stick with me for a long time to come.

What an immensely rewarding and intense experience this film was. I feel so lucky that I’ve grown to really enjoy silent film; for so long I found it impenetrable, and I was missing out on so many incredible things. There are emotions and ideas being presented here that I think just wouldn’t work in a sound based structure. The melancholy nature of the story, and the moments of true sadness and terror, match up so perfectly well with the limitations of early film. Additionally, the look of the film owes so much to what was possible at the time, a more modern palette could ruin it.

This is the story of David Holm, played by the director Victor Sjöström, an abusive alcoholic who is a terror to everyone around him. The film begins on New Years Eve, and Holm is drinking with his buddies in a cemetery. He tells them a legend he heard from a drinking buddy that he hasn’t seen in exactly a year. The legend is that of the titular phantom carriage, and the idea that the last unworthy person to die on New Years Eve is doomed to become Death’s messenger for the following year. Additionally, each day as Death’s servant feels like 100 years to the sinner, who spends the entire time wallowing in their own remorse for what they’ve done.

At the same time that Holm is telling this story, we’re introduced to Edit, a Salvation Army volunteer who is on her death bed with tuberculosis. She desperately wants to see Holm one last time before she dies, but when her friends find him he absolutely refuses to go visit her. His drinking buddies are so appalled at his behavior that they begin to fight with him, and one of them inadvertently causes his death. His spirit is visited by his old drinking buddy, who as it turns out has been doing Death’s work for the past year. In a scenario somewhat reminiscent of Charles Dickens’ A Christmas Carol, his friend makes him relieve the terrible choices he’s made during his life.

It’s amazing how much this film affected me, and without the necessity of any talking. As with City Lights, I was once again taught that a great story can be conveyed with nothing but pure emotion. There is an idea, I think, that silent films had simple stories, but this film defies that notion entirely. This is a remarkably complex plot, and it’s told as much through inference as it is through the intertitles. We get a lot of discussion that never gets words, but we understand exactly what is being said through the context and the actions of the actors.

There is also a notion that the acting in silent films was like stage acting, over the top in order to hit the audience over the head with what was going on. This film avoids that completely as well, the acting here is subtle and impressive, full of meaning and emotion. Sjöström was apparently very firm on this point, for despite having come from the theater himself, he felt that overly melodramatic acting would be detrimental to telling his story. Instead he pushed his actors to use movements, and gestures, and he spent a lot of time focusing on their faces, in order to capture their feelings.

The acting of Victor Sjöström himself is the standout performance in this film. The hero of Ingmar Bergman, he was Sweden’s preeminent director of this era. Bergman loved him so much, that he cast him as the retired Isak Borg in Wild Strawberries, which is where I first fell in love with his acting. But he’s even more impressive here than he was in that much later film. The role he’s playing, that of a fallen man, corrupted by his anger, and his ideas of revenge, and doomed to destroy anyone around him, is an immensely complicated one. His David Holm isn’t a simple man, or a caricature of addiction and abuse. He’s a real person, with complex motivations, and you get a really clear sense of the torn nature of his soul.

The score, to no real surprise, is critical in the ability of silent films to connect with the audience. The score here, which was created by Swedish composer Matti Bye in 1998, is absolutely perfect for the story Sjöström is trying to tell. It’s at turns haunting and melancholic, and at other times almost playful and happy in tone. It really serves to heighten the emotional impact of whatever is happening on screen. Interestingly, there is another score that is sometimes paired with this film, made by an electronic duo called KTL. KTL is one-half Stephen O’Malley, who is a member of one of my favorite Drone bands Sunn 0))). I’m really looking forward to watching the film again with their score, to see how differently it effects me, and if it changes what I take away from the story.

The effects, especially that of the phantom carriage and its driver, are routinely praised as being some of the best in early film. And they are absolutely great, but they would be nothing to me without this incredible story. I found myself really invested in what happened to these people, and that’s a wonderful feeling to experience when watching any film. I was aghast at the most evil moments of Holm’s wayward life, and also touched by the love of the people around him who continually tried to save him. The film manages to avoid being overly sentimental, or smarmy; pitfalls that later attempts at a similar story tend to fall into, most famously in It’s a Wonderful Life. It avoids those tropes almost entirely, and yet it still conveys a similar message of the ability we all have to turn our lives around at any moment. This was an absolutely towering film, one that I cannot wait to watch again. - Feb 8th, 2015