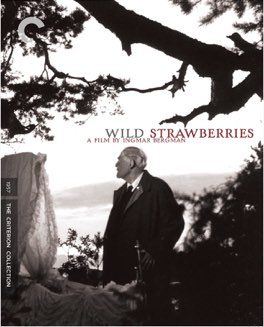 A thoughtful and melancholy film that’s nevertheless ultimately very uplifting. This one was an absolute gem, with a message that’s definitely going to stick with me.

I’m not sure what to even say, this film hit me hard. It’s an absolutely stunning work, full of all the power of The Seventh Seal that blew me away, but a lot more connected to everyday life. It’s a remarkable film, really one of the best pure character studies I’ve ever seen. It’s a beautiful film, no one does dream sequences or odd imagery quite like Ingmar Bergman did. The acting is phenomenal, it was really nice to see Bibi Andersson and Max von Sydow again. The story though, it’s the story that really made this film so special for me. I think I’ll be thinking about this one for quite a while.

So, with that kind of setup, what’s the story all about? Like most deep things it’s very simple on its face. The story is that of 78 year old doctor Isak Borg, played with a staggering amount of sophistication and quiet dignity by legendary Swedish director/actor Victor Sjöström. Dr. Borg is being honored for 50 years of service by the university who first granted him his degree, and he decides, after waking up from a strange dream, to drive to Lund from Stockholm, instead of taking the flight he had booked. His daughter-in-law, Marianne, decides to come with him. Along the way they stop at various places from his childhood, including the summer house his family stayed in when he was young. They also pick up two groups of hitchhikers, a decision that goes very well for one group and very poorly for the other. As they travel, Dr. Borg has a serious of visions of his childhood, mostly surrounding his love of his cousin Sara. As I said, when spelled out it seems simple, but it’s what happens inside that story that makes this such a ridiculously great film.

This is a sad film, but a happy one too. It’s about regret and longing and loneliness, but it’s also about redemption and understanding. In a lot of ways it’s the same theme as The Seventh Seal, all about how we understand death and our place in the world. Instead of a war stricken religious man trying to find meaning in the empty world he’s been a part of we get a stubborn man from a cold family who is getting older and is both afraid of death and worried that his life has lacked meaning. The coldness part really connected with me, likely because of my own family’s emotional detachment. I think anyone who has ever thought of having children has worried that they will pass on to those children the sins of their own parents. I certainly have, I worry that somehow I’ll burden my future offspring with the same empty space in my heart that my well-meaning parents saddled me with. This film drives that narrative home in a big way. Isak is confronted constantly with the impact of his personality on the people he loves the most, and it’s mostly not a pleasant one. Still, the film’s message for me was that it’s never too late to come to an understanding about who you are, or to learn to approach the people around you differently. It’s a really nice message and one that we can all use.

I can’t really overemphasize how great Victor Sjöström is as Dr. Isak Borg. Apparently Bergman wrote the film with Sjöström in mind, and in fact claimed later that he wouldn’t have even gone ahead with the production if Sjöström hadn’t agreed to be in it. I don’t know if that’s true, but I cannot imagine another actor doing half the job that Sjöström does here. He’s absolutely perfect. The rest of the cast is almost as perfect though. Bibi Andersson is appropriately cast as another ingenue type, and her dual role as Dr. Borg’s childhood sweetheart/a girl they take on as a hitchhiker provides some of the films best moments and lines. Bergman and Andersson were having an affair when this film was made, which makes it even more interesting that she’s sort of the road not traveled aspect of the story. Ingrid Thulin, whom I wasn’t previously familiar with, is also phenomenal as Dr. Borg’s daughter-in-law. She has a sardonic quality to her mannerisms that provides a natural foil to the weary sadness of Sjöström’s performance. It’s all completely brilliant, I’ve seen two Bergman films now and I’ve loved both, I can’t wait to see what’s next. - Aug 17th, 2014