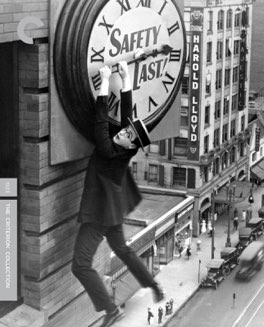 A much more uneven affair than The Freshman, this was still a wonderfully fun film overall. The final scene is one of the most impressive and immersive I’ve ever seen.

Much like with my review of The Freshman, the first thing I noticed about the Harold Lloyd of this film was how different he was to the other great silent film comedians.

As I said in that review, Lloyd has so much less distance from ordinary people than, say, Charlie Chaplin does. He’s not an outsider commenting on society, but rather someone right in the middle of it. He represents all of us, in our simple struggle to get through life, and that gives him an immensely likable quality on screen.

Lloyd famously exacted extremely protective control over the distribution and sale of his work. He was fastidious in his own preservation of it, but never allowed it to be licensed for television, or to be re-released in the theaters. This surely has a lot to do with why his name has faded over the years, while his contemporaries continued to be widely known.

I think that’s extremely unfortunate, and I’m really glad it’s beginning to change. Lloyd’s work is so vibrant, so relevant, even today. In fact, I think his everyman status makes him all the more relatable to modern audiences. He still seems like he’s one of us.

This film follows Lloyd as he leaves his small hometown for the big city. He’s told his hometown sweetheart that as soon as he gets some money he’ll send for her and they’ll be married. Months later he’s struggling just to make ends meet, but because he doesn’t want to disappoint her, he spins tales of promotions and raises.

It’s not a malicious thing to do, and he clearly means well, but it does give the film a very different feeling to The Freshman, where he simply wanted to fit in. He’s somewhat more calculated in his actions here, and it propels the comedy, as his lady inevitably arrives in the city looking for her powerful and important man.

As with so much of the media from such a different era, there are parts of this film that were hard for me to watch. There is a scene somewhere in the middle, where Lloyd goes jewelry shopping, looking to get his girlfriend a necklace.

The shopkeeper is one of the most hideous stereotypes of a Jewish swindler that I’ve ever seen on film. He’s seedy looking, wearing a Kippah, and wringing his hands in his delight at greedily taking all of Lloyd’s money. I understand that this film is from a different time, and I’m trying not to judge it based on modern standards, but it was extremely uncomfortable, and took me out of the film’s world.

What brought me back were the amazing special effects of the iconic final scene. The film ends with Lloyd’s character scaling the outside of a many stories tall building, and it was one of the flat out most exciting scenes I can remember in any film.

Even though I know how the effect was done, they used the natural forced perspective of a particular area of Los Angeles, it was still absolutely breathtaking. There were moments during the climb where it appeared that Lloyd would fall, and I actually gasped with nervousness. It’s an absolute marvel of a sequence.

I think, ultimately, that’s what I enjoy the most about these Lloyd films; his unparalleled attention to the small details of a choreographed scene. He clearly put so much effort into getting every detail just right, and it really makes all the difference, even ninety-two years later. - May 16th, 2015