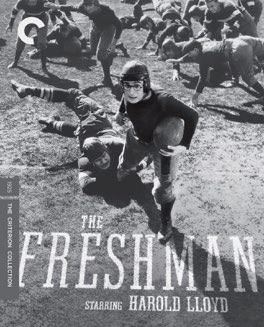 For a film of this age, this was remarkably relatable to life today. If all of Harold Lloyd’s films are this wonderful I may have found a new favorite.

We’ve all been that guy before. Or, perhaps I should say, I’ve definitely been that guy before. The one who is trying way too hard to fit in with a group of people he’s just met. The one who’s making a fool of himself but remains blissfully clueless of it. In other words, most of us have been a freshman before, and many of us have been this freshman before. The brilliance of this film is that it’s so instantly relatable to anyone that has ever just wanted to be liked.

Harold Lloyd’s character in this film, with his ridiculous nickname of “Speedy the Spender,” is simply a magnified version of someone I definitely dabbled as in my youth. He’s young, and he has no idea who is or what he wants. So instead, he attempts to become someone he admires, in this case his cinema idol, by aping his mannerisms and style. I’ve definitely worn these masks before, trying on different approaches to the world, hoping one of them will fit me. Certainly Lloyd’s character is an extreme version, a comic spotlight full of absurdity, and yet he’s not as far away from my own past as I’d probably like to admit.

The summer before I went away to college, my school sent out a form to fill out to help guide them as to which dorm they should place me in. It was intended to be an honest reflection of our interests and predilections, with questions like “Are you a smoker?” and “Do you listen to loud music?” I lied my head off on that form. I said I was a smoker, who listened to loud music, and liked to party. None of which was true; I was in fact a fairly introverted, non-smoking, indie-folk music lover. But, I knew that I wanted to loosen up, to be less introverted, and I also knew that unless I forced myself to be around people that weren’t going to like me initially, it would never happen. So I lied and threw myself into a place where I would be forced to change, and hopefully to grow.

This process ended up working out well for me, but it definitely took some time. I was initially not well received, much like Lloyd in this film. Although I didn’t end up becoming the person I imagined before I left, I did become a lot more comfortable being me, and was much better liked for it. I certainly didn’t have anything as dramatic a turn-around as Lloyd does in this film, but I would say that I experienced a real life version of the same basic process. Perhaps that’s one of the reasons I so enjoyed this film, because I saw so much of myself in the main character.

This was also my first experience of Lloyd, who, along with Charlie Chaplin and Buster Keaton, was one of the most famous and successful comedians of the silent film era. To me, he has a very different vibe than those two, at least if this film is any indication. He’s much less of an outsider than Chaplin, or a social critic like Keaton, and more of an everyman, someone who’s simply trying to fit in. As a result, it was extremely easy to like him, and also to see myself reflected in his character. The film charmed me almost instantly, and didn’t let go until the very end. This is an extremely smart and sweet comedy, and it had quite a few true laugh-out-loud moments.

What surprised me the most about this film though, was how much I liked humor that isn’t that dissimilar to some of the Three Stooges / W.C. Fields work that I’ve previously expressed my distaste for. At first I was surprised at how much I was enjoying myself, but in retrospect I think I understand it. The characters played by The Stooges, or Fields, simply aren’t likable to me. They come across either as cantankerous, or stupid, or mean. They represent a view of humanity that I simply don’t enjoy. Lloyd, on the other hand, is portraying a very naive person who is just trying his best. And that small change, of the humor being not as much at his expense, but rather at the absurdity of his circumstances, ended up making all the difference for me. - Apr 26th, 2015