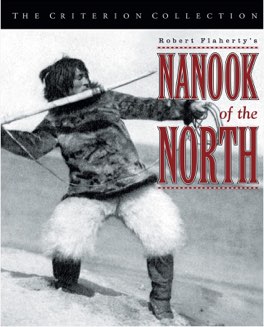 An incredibly moving film, one that so clearly shows a love for its subjects. This is a fascinating look at a time and place that otherwise no longer exists.

Nanook of the North

My attempt to watch all the films in The Criterion Collection has given me many wonderful things. It has greatly increased my attention span for one, counteracting all those years of twitch paced modern television media watching. But another thing it has given me, is a true love for the art of silent filmmaking. If I look back at my review for Charlie Chaplin’s phenomenal City Lights, for example, it starts out by explaining that I wasn’t expecting to be able to connect to silent film back then. I think what I meant was that I didn’t fully understand the language of the medium, and I’m so happy I eventually grasped it, as it means I get to see and love films like this one.

This film has often been called the first feature-length documentary. As it turns out that’s fairly misleading for quite a few reasons. The film, although it might seem to be claiming to be an authentic look at the life of an Inuit named Nanook and his family, is really something a bit different. What director Robert Flaherty made was not a documentary in the cinéma vérité tradition, but rather an absolutely fascinating piece of what is now called salvage ethnography. Flaherty was attempting to showcase this culture at its height, and not in the state of decline it was in at the time the film was made.

Practically speaking that means that much of this film was staged, or at least altered, to show things not as they were, but as they had been in the recent past. Flaherty was taking advantage of the fact that while the traditional ways of the Inuit were fading, the people he’d met hadn’t quite forgotten them yet. For example; the Inuit of his time had already moved from their traditional clothing to a more western inspired wear. Flaherty, however, has them dressed as their grandparents might have been. While hunting, they were now using rifles, but Flaherty has them using spears, the way it would have been done in the past. None of these things were foreign to the people he was filming, just somewhat outdated. But, as a result, he preserved those traditional modes before they had truly become extinct.

Flaherty was also a filmmaker, and one who was trying to create a compelling narrative as much or more than he was attempting any form of preservation. He always pointed at the film’s subtitle, “A story of life and love in the actual Arctic”, to explain what he had intended. So, Nanook, the primary character of this film, wasn’t really called Nanook. His name was actually Allakariallak, and the family he protects throughout the film isn’t his, they were simply the most photogenic Inuit Flaherty could convince to participate. Nanook didn’t actually die during a dear hunt two years later of starvation, as the opening crawl claims, but rather in his home of tuberculosis. One of the most phenomenal scenes of the film, that of the family building an igloo for the night, had to be done in two stages. The initial building, and then for a camera the size of Flaherty’s to fit inside, a fake three walled igloo had to be constructed.

Some people have used their knowledge of these liberties to condemn the film, but that misses the point for me. This is clearly not a perfect film, but it’s still an unbelievably moving and beautiful document that showcases a culture which was even then on the verge of becoming extinct. These people did mostly live like this, for long enough that these traditions were completely ingrained in the people who acted them out for Flaherty. Without this film, with all of it’s wonder and clear love for the subjects, we would have no way to know how they lived, or what the struggles were that they faced. And even most of the staged scenes were real in at least one sense. As Roger Ebert said: “If you stage a walrus hunt, it still involves hunting a walrus, and the walrus hasn’t seen the script. What shines through is the humanity and optimism of the Inuit.” - May 9th, 2015